Harriet Beecher Stowe (June 14, 1811 – July 1, 1896) was an American abolitionist and writer. Her novel Uncle Tom's Cabin (1852) showed the lives of African-Americans slaves. It was very popular as a novel and a play, and had a great influence in the United States and Britain, helping people who did not like slavery and making many people disagree with slavery.

Stowe was born Harriet Elisabeth Beecher in Litchfield, Connecticut, on June 14, 1811. Her parents were religious leaders Lyman Beecher and Roxana (Foote) Beecher. Her mother died when Harriet was five years old. She had a sister, Catharine Beecher, who was an educator and author, and three brothers Henry Ward Beecher, Charles Beecher, and Edward Beecher.

Harriet went to the girls' school run by her sister Catharine. She received an education in the classics, including study of languages and mathematics. At 21, she moved to Cincinnati, Ohio to join her father. He had become the president of Lane Theological Seminary. She also joined the literary salon and social club called the Semi-Colon Club.

Harriet married Calvin Ellis Stowe on January 6, 1836. He was a widower and professor at the seminary. They had seven children together, including twin daughters. Calvin Stowe was a critic of slavery. The Stowes supported the Underground Railroad. They briefly sheltered several fugitive slaves in their home. 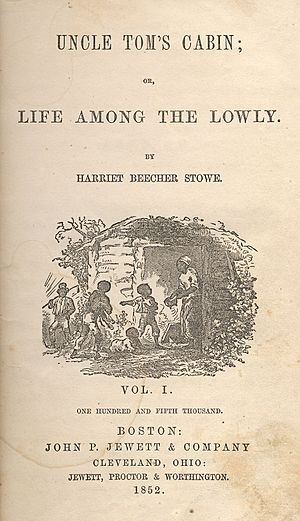 In 1850, the Stowe family moved to a house near the campus of Bowdoin College in Brunswick, Maine. Calvin Stowe was teaching in the college. On March 9, 1850, Stowe wrote to the editor of the antislavery journal National Era. She told him that she was planning to write a story about slavery. In June 1851, the first installment of her book, Uncle Tom's Cabin, was published in the National Era. She originally used the subtitle "The Man That Was A Thing". It was changed to "Life Among the Lowly". Installments were published every week from June 5, 1851, to April 1, 1852.

For the newspaper serialization (published in parts) of her novel, Stowe was paid only $400. Uncle Tom's Cabin was published in book form on March 20, 1852, by John P. Jewett with an initial print run of 5,000 copies. Each of its two volumes included three illustrations and a title-page designed by Hammatt Billings. In less than a year, the book sold an unprecedented 300,000 copies. By December 1851, sales began dropping off. A cheap edition was published to stimulate more sales.

Americans were captivated by the book. It provoked more debate about abolition and slavery. Southerns hated the book. Within a year of the book's publication, 300 babies were named "Eva" in Boston alone.

After the start of the American Civil War, Stowe went to Washington, D.C. She met President Abraham Lincoln on November 25, 1862. Stowe's daughter Hattie reported, "It was a very droll time that we had at the White House I assure you ... I will only say now that it was all very funny—and we were ready to explode with laughter all the while."

Lincoln greeted Stowe by saying, "So this is the little lady who made this big war."

Harriet's own accounts are vague, including a letter reporting the meeting to her husband: "I had a real funny interview with the President." 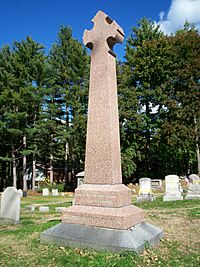 Harriet Beecher Stowe died on 1 July 1896 in Hartford, Connecticut. She is buried in the cemetery at Phillips Academy in Andover, Massachusetts. 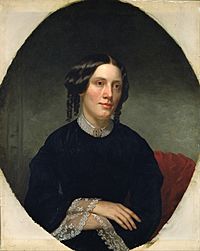 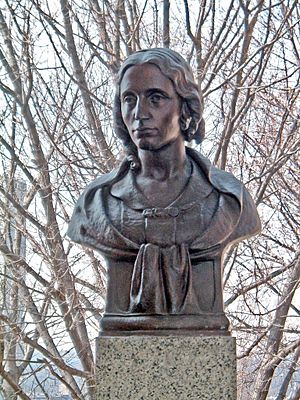 Bust by Brenda Putnam at Hall of Fame for Great Americans

Multiple landmarks are dedicated to the memory of Harriet Beecher Stowe, and are located in several states including Ohio, Florida, Maine and Connecticut. The locations of these landmarks represent various periods of her life such as her father's house where she grew up, and where she wrote her most famous work. 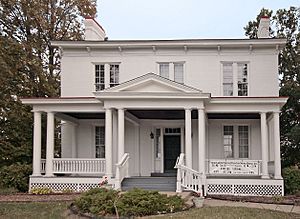 In the 1870s and 1880s, Stowe and her family wintered in Mandarin, Florida, now a neighborhood of modern consolidated Jacksonville, on the St. Johns River. Stowe wrote Palmetto Leaves while living in Mandarin, arguably an eloquent piece of promotional literature directed at Florida's potential Northern investors at the time. The book was published in 1873 and describes Northeast Florida and its residents. In 1874, Stowe was honored by the governor of Florida as one of several northerners who had helped Florida's growth after the war. In addition to her writings inspiring tourists and settlers to the area, she helped establish a church and a school, and she helped promote oranges as a major state crop through her own orchards. The school she helped establish in 1870 was an integrated school in Mandarin for children and adults. This predated the national movement toward integration by more than a half century. The marker commemorating the Stowe family is located across the street from the former site of their cottage. It is on the property of the Community Club, at the site of a church where Stowe's husband once served as a minister. The Church of our Saviour is an Episcopal Church founded in 1880 by a group of people who had gathered for Bible readings with Professor Calvin E. Stowe and his famous wife. The house was constructed in 1883 which contained the Stowe Memorial stained glass window, created by Louis Comfort Tiffany.

The Harriet Beecher Stowe House in Brunswick, Maine, is where Stowe lived when she wrote Uncle Tom's Cabin. Her husband was teaching theology at nearby Bowdoin College, and she regularly invited students from the college and friends to read and discuss the chapters before publication. Future Civil War general, and later Governor, Joshua Chamberlain was then a student at the college and later described the setting. "On these occasions," Chamberlain noted, "a chosen circle of friends, mostly young, were favored with the freedom of her house, the rallying point being, however, the reading before publication, of the successive chapters of her Uncle Tom's Cabin, and the frank discussion of them." In 2001 Bowdoin College purchased the house, together with a newer attached building, and was able to raise the substantial funds necessary to restore the house. It is now open to the public.

The Harriet Beecher Stowe House in Hartford, Connecticut, is the house where Stowe lived for the last 23 years of her life. It was next door to the house of fellow author Mark Twain. In this 5,000 sq ft (460 m2) cottage-style house, there are many of Beecher Stowe's original items and items from the time period. In the research library, which is open to the public, there are numerous letters and documents from the Beecher family. The house is open to the public and offers house tours on the half-hour.

In 1833, during Stowe's time in Cincinnati, the city was afflicted with a serious cholera epidemic. To avoid illness, Stowe made a visit to Washington, Kentucky, a major community of the era just south of Maysville. She stayed with the Marshall Key family, one of whose daughters was a student at Lane Seminary. It is recorded that Mr. Key took her to see a slave auction, as they were frequently held in Maysville. Scholars believe she was strongly moved by the experience. The Marshall Key home still stands in Washington. Key was a prominent Kentuckian; his visitors also included Henry Clay and Daniel Webster.

The Uncle Tom's Cabin Historic Site is part of the restored Dawn Settlement at Dresden, Ontario, which is 20 miles east of Algonac, Michigan. The community for freed slaves founded by the Rev. Josiah Henson and other abolitionists in the 1830s has been restored. There's also a museum. Henson and the Dawn Settlement provided Stowe with the inspiration for Uncle Tom's Cabin.

All content from Kiddle encyclopedia articles (including the article images and facts) can be freely used under Attribution-ShareAlike license, unless stated otherwise. Cite this article:
Harriet Beecher Stowe Facts for Kids. Kiddle Encyclopedia.