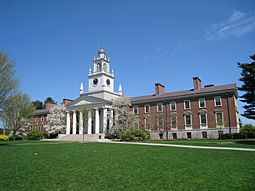 Phillips Academy (also called Andover, Phillips Andover, or PA) is a high school for boys and girls in Andover, Massachusetts, near Boston, USA. The school is a boarding school. 75% of the students live there.

Phillips Academy is one of the oldest private boarding schools in the United States. Two American Presidents, George H. W. Bush and George W. Bush, went to school there.

Phillips Academy was founded during the American Revolution as an all-boys school in 1778. The great seal of the school was designed by Paul Revere. George Washington's nephews went to the school, and he once spoke at an assembly while visiting. John Hancock, the famous signer of the United States Declaration of Independence, signed the articles of incorporation.

Phillips Exeter Academy was made three years later in Exeter, New Hampshire by Samuel Phillips' uncle John. The football teams have played against each other almost every year since 1878. This makes their rilvalry one of the oldest high school rivalries in the country.

Paul Revere put bees, a beehive, and the sun into the school's great seal. The school's main motto, Finis Origine Pendet, means "the end depends upon the beginning." It is written at the bottom of the seal. The school's second motto, Non Sibi means "not for self."

All content from Kiddle encyclopedia articles (including the article images and facts) can be freely used under Attribution-ShareAlike license, unless stated otherwise. Cite this article:
Phillips Academy Facts for Kids. Kiddle Encyclopedia.