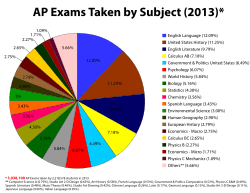 The Advanced Placement Program, or AP, is a program that offers higher level school classes for high school students in Canada and the United States. Good Schools Guide International says it is "much more difficult than most classes", although it is not as difficult as the IB program.

After World War II, the Ford Foundation gave money to committees studying education. The program was started at Kenyon College in Gambier, Ohio, by the then college president Gordon Chalmers which was then called the "Kenyon Plan". The first study was conducted by three preparatory schools—the Lawrenceville School, Phillips Academy, and Phillips Exeter Academy—and three universities—Harvard University, Princeton University, and Yale University. In 1952 they gave the report General Education in School and College: A Committee Report which said to allow high school seniors to study college level material and to take achievement examinations that allowed them to get college credit for this work. The second committee, the Committee on Admission with Advanced Standing, developed and put the plan to choose a curriculum. A pilot program was run in 1952 which covered eleven disciplines.

The College Board, a non-profit organization based in New York City, has run the AP program since 1955. From 1965 to 1989, Harlan Hanson was the director of the Advanced Placement Program. It makes and keeps guidelines for the teaching of higher level courses in various subject areas. In addition, it supports teachers of AP courses and universities. These activities are funded through fees charged to students taking AP Exams.

In 2006, over one million students took over two million Advanced Placement examinations. Many high schools in the United States offer AP courses, though the College Board allows any student to take any examination, regardless of participation in the course. Therefore, home-schooled students and students from schools that do not offer AP courses have an equal opportunity to take the examination.

As of the 2011 testing season, exams cost $87 each, though the cost may reduced for poor students who cannot pay for it. The exam reduction is $22 per exam from College Board plus an additional $8 rebate per fee-reduced exam from the school. There may be further discounts depending on the state. Out of the $87, $8 goes directly to the school to pay for the administration of the test, which some schools will reduce to lower the cost to the student.

On April 3, 2008, the College Board announced that four AP courses – French Literature, Latin Literature, Computer Science AB, and Italian Language and Culture – will be gone after the 2008–2009 school year due to no money.

Advanced Placement coursework is made to be very hard for average high school students. Most AP courses are sufficient preparation for the AP exams that students can take at the end of the year. If students do well on these exams, they can skip the introductory courses in college.

The academic benefit of AP coursework, aside from being able to pass out of college courses with good AP exam scores, is that students get an extra GPA point particularly for that class. An A+ or A in regular US History, for example, will factor in 4.0 GPA points to a student's grade; however, an A+ or A in AP US History would factor in 5.0 GPA points, which would improve that student's grade a lot.

AP courses are not required to go to college however, most students who apply to picky colleges and universities like Stanford University and MIT take multiple AP courses in high school. They do this for various purposes:

AP tests are scored on a 1 to 5 scale as follows:

Grading the AP exam takes a long time. The multiple choice part is graded by a computer and the essays are scored by a group of teachers that do not teach at the student's school.

Students usually find out what they got on the test until the middle of July .

Some students who do well on their AP exams may be allowed to skip a few classes in college. Generally, if a student gets a 4 or 5, then their university will award them credit; some colleges will also take a 3.

All content from Kiddle encyclopedia articles (including the article images and facts) can be freely used under Attribution-ShareAlike license, unless stated otherwise. Cite this article:
Advanced Placement Program Facts for Kids. Kiddle Encyclopedia.