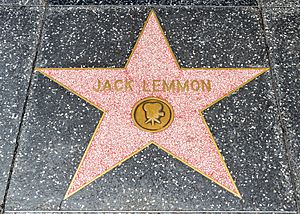 Lemmon was born in an elevator at Newton-Wellesley Hospital in Newton, Massachusetts, a suburb of Boston, where his father, John Uhler Lemmon, Jr., was the president of a doughnut company. His mother was Mildred Burgess Noel.

At Harvard, Lemmon was a member of the V-12 Navy College Training Program and was commissioned by the United States Navy, serving briefly as an ensign on an aircraft carrier during World War II before returning to Harvard after completing his military service. After graduation with a degree in War Service Sciences in 1947, Lemmon took up acting professionally, working on radio, television and Broadway.

Lemmon's film debut was a bit part in the 1949 film The Lady Takes a Sailor, but he was not noticed until his official debut opposite Judy Holliday in the 1954 It Should Happen to You. He became a favorite actor of director Billy Wilder, starring in many of his his films.

Throughout his career, Lemmon often appeared in films alongside actor Walter Matthau. They would go on to be one of the most beloved duos in cinema history. Lemmon was one of the best-liked actors in Hollywood. He is remembered as taking time for people, as the actor Kevin Spacey recalled in a tribute. In his autobiography, My Life, Burt Reynolds recalls Lemmon as the quintessential gentleman who never spoke ill of anyone, even if they deserved it.

Lemmon died of metastatic cancer of the bladder on June 27, 2001. He had been fighting the disease, privately, for two years before his death. He was interred at Westwood Village Memorial Park Cemetery in Westwood, California, buried near his friend and co-star, Walter Matthau, who died almost exactly one year before Lemmon. His gravestone reads like a title screen from a film: "JACK LEMMON in"

All content from Kiddle encyclopedia articles (including the article images and facts) can be freely used under Attribution-ShareAlike license, unless stated otherwise. Cite this article:
Jack Lemmon Facts for Kids. Kiddle Encyclopedia.