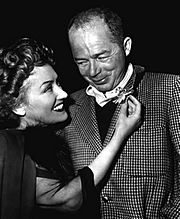 Billy Wilder (Samuel Wilder, June 22, 1906 – March 27, 2002) was an Austrian-American filmmaker, artist and journalist. He was known for directing movies such as Some Like It Hot, The Apartment, Sunset Boulevard, Double Ideminty and The Seven Year Itch. He has won two Golden Globe Awards and three Academy Awards. Wilder was born in Sucha, Galicia, Austria-Hungary (present-day Sucha Beskidzka, Poland). Wilder was Jewish and moved to the United States in 1934. He was married to Judith Coppicus from 1936 until they divorced in 1946. He was married to Audrey Young from 1949 until his death in 2002. Wilder has two children. Wilder died of pneumonia in Beverly Hills, California.

All content from Kiddle encyclopedia articles (including the article images and facts) can be freely used under Attribution-ShareAlike license, unless stated otherwise. Cite this article:
Billy Wilder Facts for Kids. Kiddle Encyclopedia.