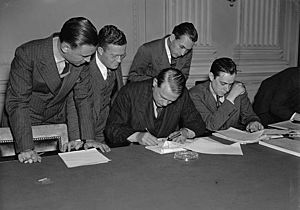 Chairman Dies of HUAC proofs his letter replying to President Roosevelt's attack on the committee, October 26, 1938.

The HUAC was created in 1938 to investigate alleged activities on the part of private citizens, public employees, and those organizations suspected of having communist ties. In 1969, the House changed the committee's name to "House Committee on Internal Security". When the House abolished the committee in 1975, its functions were transferred to the House Judiciary Committee.

The committee's anti-communist investigations are often associated with those of Joseph McCarthy who, as a U.S. Senator, had no direct involvement with this House committee. McCarthy was the chairman of the Government Operations Committee and its Permanent Subcommittee on Investigations of the U.S. Senate, not the House.

All content from Kiddle encyclopedia articles (including the article images and facts) can be freely used under Attribution-ShareAlike license, unless stated otherwise. Cite this article:
House Un-American Activities Committee Facts for Kids. Kiddle Encyclopedia.