Kirk Douglas (born Issur Danielovitch; December 9, 1916 – February 5, 2020) was an American actor, filmmaker, and author. A centenarian, he was one of the last surviving stars of the film industry's Golden Age.

He had his film debut in The Strange Love of Martha Ivers (1946) with Barbara Stanwyck. Douglas soon developed into a leading box-office star throughout the 1950s, known for serious dramas, including westerns and war movies. During his career, he appeared in more than 90 movies. Douglas is known for his explosive acting style, which he displayed as a criminal defense attorney in Town Without Pity (1961).Douglas became an international star through positive reception for his leading role in Champion (1949), which brought him his first nomination for the Academy Award for Best Actor. 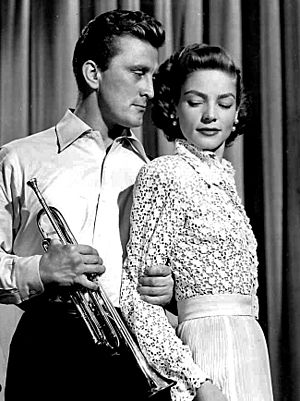 With Lauren Bacall in Young Man with a Horn 1950

Other early films include Young Man with a Horn (1950), playing opposite Lauren Bacall and Doris Day; Ace in the Hole opposite Jan Sterling (1951); and Detective Story (1951). He received a second Oscar nomination for his dramatic role in The Bad and the Beautiful (1952), opposite Lana Turner, and his third nomination for portraying Vincent van Gogh in Lust for Life (1956).

In 1955, he established Bryna Productions, which began producing films such as Paths of Glory (1957) and Spartacus (1960). In those two films, he collaborated with the then-relatively-unknown director Stanley Kubrick taking lead roles in both films. He produced and starred in Lonely Are the Brave (1962), considered a classic, and Seven Days in May (1964), opposite Burt Lancaster, with whom he made seven films. 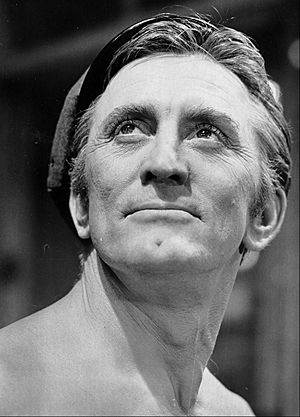 In 1963, he starred in the Broadway play One Flew Over the Cuckoo's Nest, a story that he purchased and later gave to his son Michael Douglas, who turned it into an Oscar-winning film.

As an actor and philanthropist, Douglas received three Academy Award nominations, an Oscar for Lifetime Achievement, and the Presidential Medal of Freedom. As an author, he wrote ten novels and memoirs. He is No. 17 on the American Film Institute's list of the greatest male screen legends of classic Hollywood cinema, the highest-ranked living person on the list until his death.

After barely surviving a helicopter crash in 1991 and then suffering a stroke in 1996, he has focused on renewing his spiritual and religious life. He lived with his second wife Anne Buydens, a producer.

Douglas appeared at the 2018 Golden Globes at the age of 101 with his daughter-in-law Catherine Zeta-Jones; he received a standing ovation and helped to present the award for "Best Screenplay - Motion Picture". This was a rare appearance for Douglas. 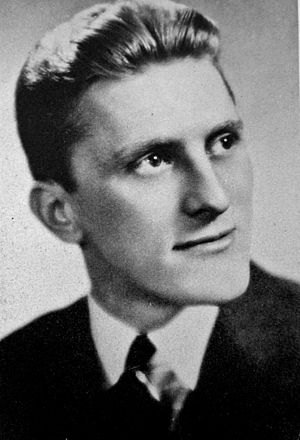 Douglas was born in Amsterdam, New York. His parents were Jewish emigrants from Chavusy, Mogilev Region, in the Russian Empire, and the family spoke Yiddish at home.

His father's brother, who emigrated earlier, used the surname Demsky, which Douglas's family adopted in the United States. Douglas grew up as Izzy Demsky and legally changed his name to Kirk Douglas before entering the United States Navy during World War II. In his autobiography, Douglas explains that for many actors at the time who had unusual or foreign-sounding birth names, a simpler Americanized name was often preferred.

His friend Karl Malden, who also changed his name for that reason, made suggestions. Douglas knew that many leading stars at the time had changed their names, including Robert Taylor, John Wayne, Cary Grant and Fred Astaire. 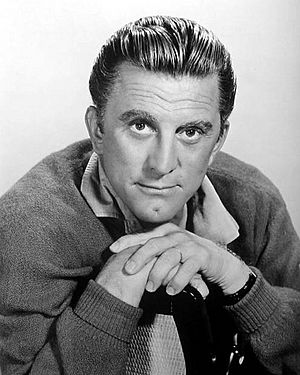 In his 1988 autobiography, The Ragman's Son, Douglas notes the hardships that he, along with six sisters and his parents, endured during their early years in Amsterdam, New York. Growing up, Douglas sold snacks to mill workers to earn enough to buy milk and bread to help his family. Later, he delivered newspapers and during his youth he had more than forty jobs before becoming an actor.

Douglas first wanted to be an actor after he recited the poem The Red Robin of Spring while in kindergarten and received applause. In high school, after acting in plays, he then knew he wanted to become a professional actor. Unable to afford the tuition, Douglas talked his way into the dean's office at St. Lawrence University and showed him a list of his high school honors. 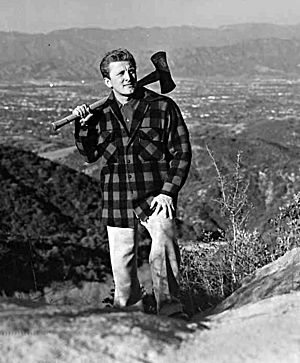 Douglas near his home in Los Angeles circa 1950

He received a loan which he paid back by working part-time as a gardener and a janitor. He was a standout on the wrestling team and wrestled one summer in a carnival to make money. Douglas's acting talents were noticed at the American Academy of Dramatic Arts in New York City, which gave him a special scholarship.

He enlisted in the United States Navy in 1941, shortly after the United States entered World War II, where he served as a communications officer in anti-submarine warfare aboard USS PC-1137. He was medically discharged in 1944 for war injuries sustained from the accidental dropping of a depth charge. 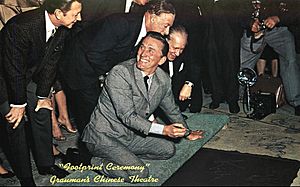 Signing his name at the Chinese Theatre 1962

After the war, Douglas returned to New York City and found work in radio, theater and commercials. In his radio work, he acted in network soap operas. His stage break occurred when he took over the role played by Richard Widmark in Kiss and Tell (1943), which then led to other offers.

Douglas had planned to remain a stage actor, until his friend, Lauren Bacall, helped him get his first film role by recommending him to producer Hal B. Wallis, who was looking for a new male talent.

All content from Kiddle encyclopedia articles (including the article images and facts) can be freely used under Attribution-ShareAlike license, unless stated otherwise. Cite this article:
Kirk Douglas Facts for Kids. Kiddle Encyclopedia.