In 2016, he made a brief and unsuccessful bid for President of the United States in the 2016 Democratic primaries. In January 2020, Chafee announced he would run again, but this time for the Libertarian nomination. He ended his second campaign in April 2020.

Chafee was born in Providence, Rhode Island. His father, John Chafee, was also a Senator from Rhode Island and member of the liberal wing of the Republican Party. His mother was Virginia Coates. Chafee was raised in Warwick, Rhode Island. He studied at Brown University and at Montana State University.

Chafee entered politics in 1985 as a delegate to the Rhode Island Constitutional Convention. A year later, he was elected to the Warwick City Council, where he served until his election as Warwick's mayor in 1992, a post he held until his 1999 appointment to the U.S. Senate.

After his father died in office, Chafee was appointed to fill his vacancy. He was elected to his first full term in 2000.

In 2004, he did not endorse the reelection of President George W. Bush, and urged other Republicans to write-in in the November election George H. W. Bush, not his son. In January 2006, he was also the only Republican senator to vote against Samuel Alito to the United States Supreme Court.

He was defeated for re-election in the Senate in 2006 by Democrat Sheldon Whitehouse. 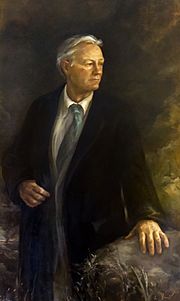 In 2012, he served as co-chair of Barack Obama's re-election campaign. Since then, he was a Democrat.

On May 1, 2013, Chafee signed a bill that legalized same-sex marriage in Rhode Island.

Chafee has shown some willingness to deviate from strict "War on Drugs" policies, in favor of alternative approaches to America's drug-crime problem.

On September 4, 2013, Chafee announced that he would not run for re-election as Governor of Rhode Island after months of low-approval ratings from the public and by election officials.

On April 9, 2015, Chafee announced that he had formed an exploratory committee in preparation for a potential candidacy for President of the United States as a Democrat in 2016. He formally declared his candidacy on June 3, 2015.

Following a widely panned debate performance, poor polling numbers, and a poor fundraising campaign, Lincoln Chafee announced on October 23 that he would be suspending his campaign.

On March 11, 2019, Chafee officially switched from the Democratic to Libertarian Party, stating that, "It's what I've always been — fiscally conservative and socially liberal."

In August 2019, Chafee said that he'd "be open" to running for president as a Libertarian.

On January 5, 2020, Chaffee formally filed to run for the Libertarian nomination. He is scheduled to make a formal campaign announcement on January 8 at the National Press Club in Washington, D.C. He ended his campaign on April 5, 2020 after failing to win any of the primary contests.

All content from Kiddle encyclopedia articles (including the article images and facts) can be freely used under Attribution-ShareAlike license, unless stated otherwise. Cite this article:
Lincoln Chafee Facts for Kids. Kiddle Encyclopedia.