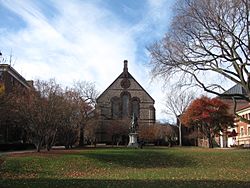 Brown University is an American private research university in Providence, Rhode Island, United States and is a member of the Ivy League. It was founded in 1764 as the College in the English Colony of Rhode Island and Providence Plantations, early in the reign of King George III (1760–1820) and before American independence from the British Empire. It was founded by the Brown brothers, who were slave traders. Brown is the third oldest institution of higher education in New England and seventh oldest in the United States.

Brown is ranked as the 14th national university behind Princeton, Harvard, Yale, Columbia, Stanford, University of Chicago, Duke, MIT, University of Pennsylvania, Caltech, Dartmouth, Johns Hopkins, and Northwestern. Brown was the first college in the country to accept students of any religion.

It is the second last ranked Ivy League University with Cornell being the last.

All content from Kiddle encyclopedia articles (including the article images and facts) can be freely used under Attribution-ShareAlike license, unless stated otherwise. Cite this article:
Brown University Facts for Kids. Kiddle Encyclopedia.