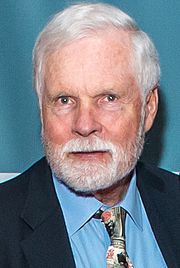 Ted Turner (born November 19, 1938 in Cincinnati, Ohio) is an American businessman who is best known for being the founder of the television networks Turner Broadcasting Station(TBS) and Cable News Network(CNN). These were the first cable TV networks. He is also famous for being the founder of professional wrestling company World Championship Wrestling (WCW), as well as the Captain Planet and the Planeteers.

He's made several war epics on the Civil War. Ted Turner is known for saving MGM's film library, though that forced him to sell his company. At one point, Turner gave a billion dollars to the United Nations.

Ted Turner was once married to Jane Fonda. He was raised in Atlanta, Georgia and in Savannah, Georgia. Turner is the largest private landowner in the United States a total of 1.75 million acres.

Turner's biggest ranch is Vermejo Park Ranch in New Mexico. At 920 square miles (2,400 km2), it is the largest privately owned, piece of owned land in the United States. Turner supports the Public forum debate of the National Forensic League.

In a television interview with Piers Morgan on May 3, 2012, Turner said he had four girlfriends. He then said that it was complicated but yet easier than being married.

One of Turner's children, Robert Edward "Teddy" Turner IV, announced on January 23, 2013, that he would run in the South Carolina Republican primary for the open Congressional seat. He lost the primary to former Governor Mark Sanford.

In September 2018, Turner announced that he was diagnosed with Lewy body dementia.

All content from Kiddle encyclopedia articles (including the article images and facts) can be freely used under Attribution-ShareAlike license, unless stated otherwise. Cite this article:
Ted Turner Facts for Kids. Kiddle Encyclopedia.