Since the 1960s Fonda has appeared in movies, she has won two Academy Awards and received several other awards and nominations. She initially announced her retirement from acting in 1991, and said for many years that she would never act again, but she returned to film in 2005 with Monster in Law. She has also produced and starred in several exercise videos released between 1982 and 1995.

Fonda has served as an activist for various political causes, one of the most notable of which was her opposition to the Vietnam War. She has also protested the Iraq War and violence against women. She describes herself as a liberal and a feminist.

Since 2001, Fonda has considered herself a Christian. She published an autobiography in 2005 and currently lives in Atlanta, Georgia. 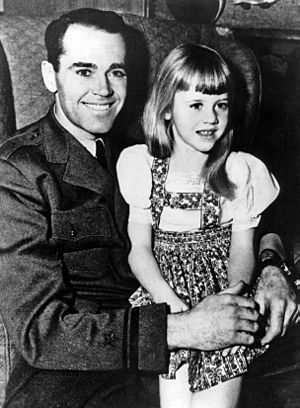 Jane Fonda was born in New York City to actor Henry Fonda and socialite Frances Ford Seymour, her mother died when she was 12 years old.

Henry Fonda had distant Dutch ancestry, and the surname Fonda originates from Holland. Jane Fonda's name was apparently inspired by Jane Seymour, the third wife of King Henry VIII of England. She was frequently called "Lady Jane" or "Lady", as a child, nicknames she greatly disliked.

Her brother, Peter Fonda (born 1939), and his daughter Bridget Fonda (born 1964), are also actors. She has an older half-sister, Frances Brokaw, as well as an adopted sister, Amy, who was born in 1953.

At the age of 15, Fonda taught dance at Fire Island Pines, New York. She attended the Emma Willard School in Troy, New York, and Vassar College in Poughkeepsie, New York, but left to become a fashion model, gracing the cover of Vogue magazine twice.

For many years, Fonda was a ballet enthusiast, but after fracturing her foot while filming The China Syndrome, she was no longer able to participate. To compensate, she began actively participating in aerobics and strengthening exercises. This became a second career for her, which continued for many years.

In 1982, Fonda released her first exercise video, titled Jane Fonda's Workout, which sold 17 million copies, the most of any home video ever. The video's release led many people to buy the then-new VCR, in order to watch and perform the workout in the privacy and convenience of their own homes. Fonda subsequently released 23 more workout videos, five workout books, and thirteen audio tapes. Her most recent original workout video was released in 1995. 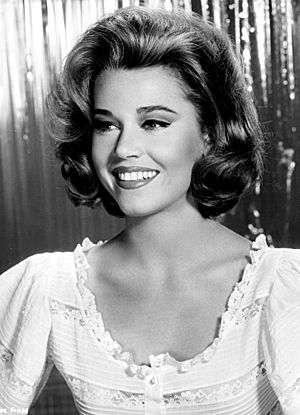 Fonda became interested in acting in 1954, while appearing with her father in a charity performance of The Country Girl at the Omaha Community Playhouse. After dropping out of Vassar, she went to Paris for two years to study art. Upon returning to the states, in 1958, she met Lee Strasberg and the meeting changed the course of her life, Fonda saying, "I went to the Actors Studio and Lee Strasberg told me I had talent. It was the first time that anyone, except my father – who had to say so – told me I was good. At anything. It was a turning point in my life. I went to bed thinking about acting. I woke up thinking about acting." 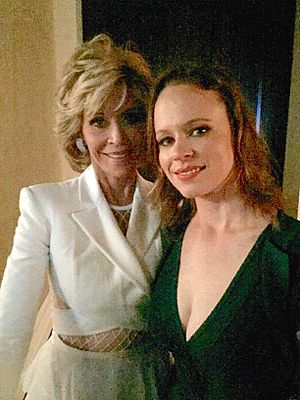 In 1962, Fonda was given the honorary title of "Miss Army Recruiting" by the Pentagon.

In 1981, she was awarded the Women in Film Crystal Award.

In 1994, the United Nations Population Fund made Fonda a Goodwill Ambassador. In 2004, she was awarded the Women's eNews 21 Leaders for the 21st Century award as one of Seven Who Change Their Worlds.

In 2007, Fonda was awarded an Honorary Palme d'Or by Cannes Film Festival President Gilles Jacob for career achievement. Only three others had received such an award.

In December 2008, Fonda was inducted into the California Hall of Fame, located at The California Museum for History, Women and the Arts.

In November 2009, she received the National German Sustainability Award. She was also selected as the 42nd recipient (2014) of the AFI Life Achievement Award.

In 2017, she received a Goldene Kamera lifetime achievement award.

All content from Kiddle encyclopedia articles (including the article images and facts) can be freely used under Attribution-ShareAlike license, unless stated otherwise. Cite this article:
Jane Fonda Facts for Kids. Kiddle Encyclopedia.