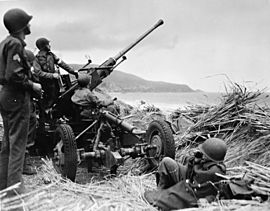 American soldiers with an anti-aircraft gun in Algeria in 1943

Anti-aircraft warfare, or air defence, is any way of fighting military aircraft in combat from the ground. Different guns and cannons have been used for this since the first military aircraft were used in World War I. They have become more powerful over the years. After World War II, guided missiles began to be used too, like the "surface-to-air missile", and today both are used to fight against aircraft.

Nicknames for anti-aircraft guns include AAA or triple-A, an abbreviation for anti-aircraft artillery, and flak or flack (from the German Flugabwehrkanone, aircraft defence cannon). An anti-aircraft missile is another name for a surface-to-air missile, also said SAM for short.

All content from Kiddle encyclopedia articles (including the article images and facts) can be freely used under Attribution-ShareAlike license, unless stated otherwise. Cite this article:
Anti-aircraft warfare Facts for Kids. Kiddle Encyclopedia.