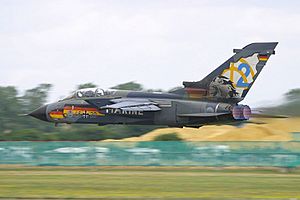 The Panavia Tornado is a twin-turbojet attack and electronic warfare aircraft. It was built by three European countries: Germany, Italy, and the United Kingdom. Its first flight was in 1974. Its introduction was in 1979. The Royal Air Force used it in the Gulf War, war in Afghanistan, and war in Libya. Saudi Arabia also uses this aircraft.

The Tornado ADV is a fighter variant.

All content from Kiddle encyclopedia articles (including the article images and facts) can be freely used under Attribution-ShareAlike license, unless stated otherwise. Cite this article:
Panavia Tornado Facts for Kids. Kiddle Encyclopedia.