Kids Encyclopedia Facts
For other pages that use "Eagle", see Eagle (disambiguation).

The F-15 Eagle is a fighter jet that originally made by McDonnell-Douglas (later Boeing). It is known around the world for its toughness and undefeated record, meaning that it has never been shot down by an enemy plane. It is used primarily by the United States Air Force, but it is also used in Israel, Japan, Saudi Arabia and South Korea. It usually carries missiles and an M61 Vulcan gun to shoot down enemy fighter jet planes. More than a thousand have been made. 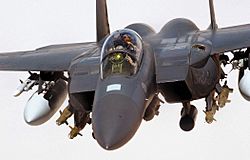 In 1981, the F-15 was redesigned to include the ability to carry bombs, allowing the F-15 to do the job of attack aircraft. This means it can also destroy things on the ground. This new variant of the aircraft was called the McDonnell Douglas F-15E Strike Eagle.

All content from Kiddle encyclopedia articles (including the article images and facts) can be freely used under Attribution-ShareAlike license, unless stated otherwise. Cite this article:
McDonnell Douglas F-15 Eagle Facts for Kids. Kiddle Encyclopedia.