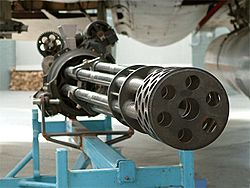 M61 Vulcan is a hydraulic and pneumatic rotary cannon. It has six barrels. It is cooled by air and fires by the power of electricity. It is a Gatling-style rotary cannon. The size of its caliber is 20 mm. It fires at an very very high speed. It has been the main cannon armament of United States military fixed-wing aircraft for over fifty years. It was made by General Electric at first, but today it is made by General Dynamics.

All content from Kiddle encyclopedia articles (including the article images and facts) can be freely used under Attribution-ShareAlike license, unless stated otherwise. Cite this article:
M61 Vulcan Facts for Kids. Kiddle Encyclopedia.