The F-22 Raptor is a fighter plane made by Lockheed Martin. It first flew in 1990, and entered service in the United States Air Force in 2005. Because it is expensive, there will not be as many of them as earlier fighter planes. It uses stealth, which means it cannot be seen on radar. It can hold 6 radar-guided medium-range AIM-120 AMRAAM missiles and 2 heat-seeking, short-range AIM-9 Sidewinder missiles. Its top speed is 2.4 times the speed of sound and it features thrust vectoring, where the plane's thrust nozzles turn to help turn it faster.

The Plane is a 5th generation Fighter and is a very expensive plane to produce, and the USAF say they will provide the plane to other countries but in a "watered down state" 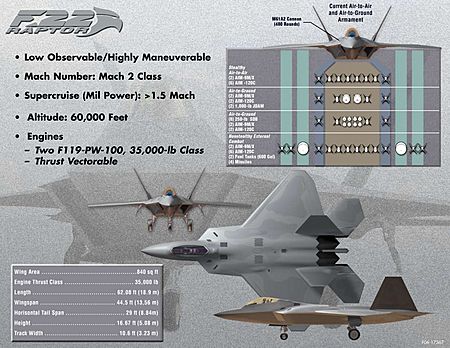 All content from Kiddle encyclopedia articles (including the article images and facts) can be freely used under Attribution-ShareAlike license, unless stated otherwise. Cite this article:
Lockheed Martin F-22 Raptor Facts for Kids. Kiddle Encyclopedia.