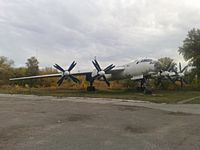 Tupolev Tu-95 (code-named Bear) was a heavy bomber plane first used in the Cold War. It was made by Tupolev. It was able to carry four powerful nuclear bombs, and in its later years it was used as a spy plane and an unmanned bomber.

The Tu-95 first flew in 1952, and was introduced in 1956. It was used a lot during the Cold War, this is because it could fly to far places. In fact, it could go more than 500 miles per hour, and has a range of 9,000 miles. The plane is driven by a turboprop engine, which makes it fast. The plane's speed is also given by its wings, which are swept back to make it sleek.

Unlike most new bombers, the Tu-95 has a turret in the tail. Right now, the Tu-95 is still in the Russian Air Force. There is also another version, called the Tu-142 that is in the Russian Navy. The Bear will be in militaries until the year 2040.

All content from Kiddle encyclopedia articles (including the article images and facts) can be freely used under Attribution-ShareAlike license, unless stated otherwise. Cite this article:
Tupolev Tu-95 Facts for Kids. Kiddle Encyclopedia.