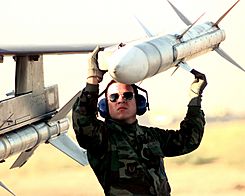 An AMRAAM missile being placed onto an F-16 fighter jet.

The AMRAAM missile is a medium air-to-air missile. It is a radar-guided missile.

The AMRAAM missile was in development for about 30 years. It was put in service in 1991 and is still used by many countries and aircraft around the world today.

All content from Kiddle encyclopedia articles (including the article images and facts) can be freely used under Attribution-ShareAlike license, unless stated otherwise. Cite this article:
AIM-120 AMRAAM Facts for Kids. Kiddle Encyclopedia.