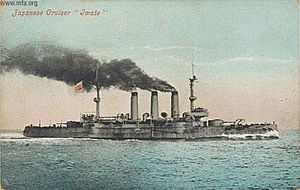 The Japanese cruiser Iwate 2, a much older one 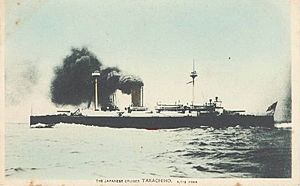 Japanese cruiser Takechiho, a much older one

A cruiser is a warship larger than the destroyer, nowadays they are usually used for bombardment. They are commonly used as command ships and/or flagships.

Older cruisers used large cannons like most other ships when they were first used, but have evolved to use the same weaponry as modern destroyers.

Cruisers were first built in 1915, but became popular among navies in the early 1930s, and are still used today.

Cruisers have changed over time and have evolved from the old, large, and coal-driven ships to the modern smaller, more efficient vessels. Cruisers are still used today, but are very different from the older ones.

All content from Kiddle encyclopedia articles (including the article images and facts) can be freely used under Attribution-ShareAlike license, unless stated otherwise. Cite this article:
Cruiser Facts for Kids. Kiddle Encyclopedia.