Jennifer Lynn Lopez (born July 24, 1969) is an American singer, songwriter, actress, dancer and producer. In 1991, Lopez appeared as a Fly Girl dancer on In Living Color, where she remained a regular until she decided to pursue an acting career in 1993. For her first leading role in the 1997 Selena biopic of the same name, Lopez received a Golden Globe nomination and became the first Latin actress to earn over US$1 million for a film. She went on to star in the adventure horror Anaconda (1997) and crime comedy Out of Sight (1998), later establishing herself as the highest-paid Latin actress in Hollywood.

Lopez ventured into the music industry in 1999 with her debut studio album On the 6, which spawned the Billboard Hot 100 top-ten singles "If You Had My Love" and "Waiting for Tonight". With the simultaneous release of her second studio album J.Lo and her romantic comedy The Wedding Planner in 2001, Lopez became the first woman to have a number one album and film in the same week. 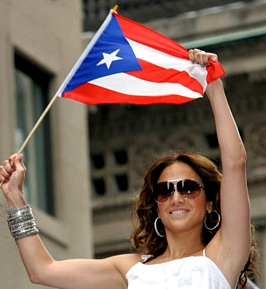 With a cumulative film gross of over US$2.9 billion and global record sales exceeding 80 million, she is regarded as the most influential Hispanic performer in the United States, as well as its highest-paid Latin entertainer. Time listed her as one of the 25 most influential Hispanic Americans, and in 2012, Forbes ranked her as the most powerful celebrity in the world, as well as the 38th most powerful woman in the world.

For her contributions to the music industry, Lopez has received a landmark star on the Hollywood Walk of Fame and the Billboard Icon Award among other honors. Her other ventures include clothing lines, fragrances, a production company, and a charitable foundation. She has been divorced three times and gave birth to twins in 2008 with then-husband Marc Anthony.

All content from Kiddle encyclopedia articles (including the article images and facts) can be freely used under Attribution-ShareAlike license, unless stated otherwise. Cite this article:
Jennifer Lopez Facts for Kids. Kiddle Encyclopedia.