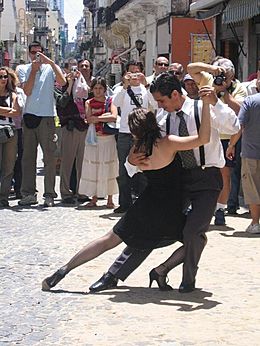 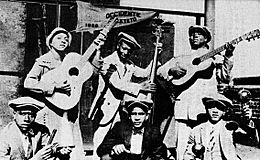 A conjunto from the west of Cuba: the instruments are of Spanish, African and Indian origin

Latin music is a form of popular music played by from Latin America, and for practical purposes that includes the Spanish-speaking Caribbean. Much latin music is accompanied by song in Spanish.

Latin music is a part of world music, which is the study of popular and traditional music in all countries. Also part of the story is the influence of Latin music in other parts of the world, especially North America.

In discussing latin music these themes are extremely important:

The influence of Europe

The influence of Europe, and in particular Spain, to latin music is as follows:

The influence of Africa

The influence of Africa comes mostly from the Yoruba, Dahomey and Kongo peoples of that great continent. Its importance in a Latin country varies according to the number of slaves imported to that country. The freeing of slaves took place at various times from the middle to the end of the 19th century. In Latin music its influence was

Influence of the indigenous peoples

West of the Andes, the music is clearly influence by the indigenous Indian peoples. The panpipes and flutes of Peru are distinctive, as is their most popular rhythms. In Ecuador forms of the flute occur, but most of the music is influenced by the European waltz (as the pasillo) and by various Afro-Latin styles from the Caribbean. Chile has the cueca, introduced in 1824. It was the "most popular air of Chile". Despite this, the influence of the indigenous Indian peoples on latin music is much less noticeable than the influence of European and African music. There are dozens of folk rhythms which survive, but usually they have had had little or no effect outside their particular locale, whereas the influence of the Spanish and African peoples is seen almost everywhere. Even in the Argentine, the famous tango uses a rhythmical device known as the cinquillo. This is a syncopated rhythm similar to that in the Cuban habanera, Syncopation and polyrhythms are unmistakable signs of Africa. The Argentine has a number of folktunes and rhythms of Indian origin, but the tango is dominant and the other rhythms are not.

Lydia Mendoza (1916–2007), a singer of Mexican descent, became the first American-born hispanic to record a song in Spanish (1928). Hispanics recording music was rare during the early 1900s. In 1960s, Tejano music (in Southern United States, Mexico), Spanish folk (in Spain), salsa (in Puerto Rico), cumbia (in South America), and bachata (in Dominican Republic) were the most popular forms of Latin music at the time.

In the 1970s, bolero became a popular music genre in Puerto Rico. Puerto Rican singer Hector Lavoe became one of its important musicians. In the United States, speaking Spanish was not well liked and many Hispanics were discriminated for speaking Spanish. Because of this, many children and young adults favored English music such as rock and roll and tried not to speak Spanish outside of their home. In the 1980s, Latin music started becoming popular. American music magazine, Billboard added several Latin music-categories. These include Top Latin Albums, Regional Mexican Albums, Tropical Albums and the Latin Pop Albums chart. Because of this, younger generations became interested in recording Latin music. However, during the late 1980s, freestyle music became the most popular Latin music genre. Freestyle music was rarely recorded in Spanish. This was because of the unpopularity to speak Spanish at the time.

In the 1990s, artists including Selena, Gloria Estefan, Luis Miguel, and Thalía became popular in this decade. They helped Latin music and recording Latin music popular for young children and adults. Selena became the most popular Latin artist of the United States in 1995, when she was murdered at 23. She became the first and only Latin artist to peak an album that contained mostly Spanish music at number one on the Billboard 200 chart. At the time of her death, she was competing with Michael Jackson and Janet Jackson with her album Dreaming of You (1995) which sold 3,000,000 copies its first year. Enrique Iglesias, Shakira, Marc Anthony, Ricky Martin, and Jennifer Lopez became popular in the mid and late 1990s.

In the 2000s, Latin music began to see a decrease of music sales. Tejano music began to become unpopular, though its "Queen of Tejano music", Selena became the "Top Latin Artist of the Decade" by Billboard magazine in 1999. Shakira, Ricky Martin, and Jennifer Lopez continued to become more popular and had number one singles and albums in the Billboard 200. Marc Anthony, Aventura, Don Omar, and Enrique Iglesias remained popular in the Latin scene. In the 2010s, Prince Royce, Pitbull, Romeo Santos, and Wisin & Yandel became popular during this decade. Jennifer Lopez, Ricky Martin, and Shakira crossover into English music with some Spanish releases. In the 2010s, bachata music became popular because of Prince Royce and Romeo Santos. While reggaeton continued to dominate Latin music radios since the mid 2000s. As of 2012, Selena remains the best-selling Latin artist with 60,000,000 copies sold worldwide. Jennifer Lopez is second with 55,000,000 copies sold worldwide.

All content from Kiddle encyclopedia articles (including the article images and facts) can be freely used under Attribution-ShareAlike license, unless stated otherwise. Cite this article:
Latin music Facts for Kids. Kiddle Encyclopedia.