Cumbia is originally a Colombian folk dance and dance music and is Colombia's representative national dance and music along with vallenato. Cumbia is very popular, widely known in the Latin music mainstream (except Brazil); South America, as well as Central America and Mexico, with lots of regional variations and tendencies. The traditional instruments of cumbia were mainly percussion; different types of drums, claves and a güiro, and woodwinds; flutes.

Modern cumbia includes instrumental mixing; guitars, accordions, bass guitar, modern flutes and modern deep-toned drums and other percussions. The basic rhythm structure is 4/4. Cumbia is the net intersection of two cultures that settled in the region of what is now northern Colombia at different times; the Amerindians and African slaves. Cumbia began as a courtship dance practiced among the slave population that was later mixed with the European instruments and influence.

Cumbia is believed to be a variant of the African Guinean cumbe music. Cumbia started in the northern region of Colombia, mainly in or around Cartagena during the period of Spanish colonization. Spain used its ports to import African slaves, who tried to preserve their musical traditions and also turned the drums and dances into a courtship ritual. Cumbia was mainly interpreted with just drums and claves.

Cumbia as a courtship ritual 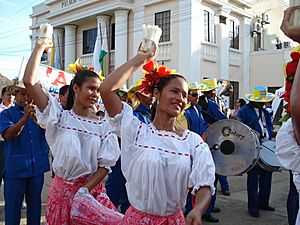 The danced courtship ritual was rhythmically performed with music played by groups of men and women couples; women playfully waving with their long skirts and holding a candle, while the men danced behind the women, with one hand on his back and the other one holding his hat, putting it on and off and waving it. Men also carried a red type of handkerchief which they either wrapped around their necks, waved in circles in the air or handheld together with women. Until mid-20th century, cumbia was considered a vulgar dance, practiced only by the lower classes. 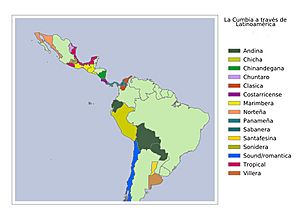 The diverse types of cumbia throughout Latin America

All content from Kiddle encyclopedia articles (including the article images and facts) can be freely used under Attribution-ShareAlike license, unless stated otherwise. Cite this article:
Cumbia music Facts for Kids. Kiddle Encyclopedia.