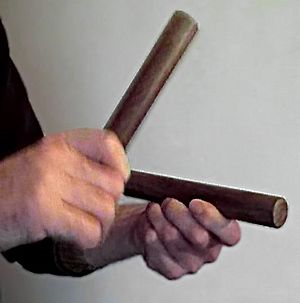 Playing a pair of claves

Claves ( Anglicized pronunciation: CLA(H)-vays) are a percussion instrument (idiophone), consisting of a pair of short (about 20–30 cm (7.9–11.8 in), thick dowels. Traditionally they are made of wood, typically rosewood, ebony or grenadilla. In modern times they are also made of fibreglass or plastics.

When struck they produce a bright clicking noise. Claves are sometimes hollow and carved in the middle to amplify the sound. Holding the clave on top of finger nails makes the sound more clear. The other is held by the dominant hand at one end with a firmer grip, much like how one normally holds a drumstick. With the end of this clave, the player strikes the resting clave in the center.

The basic principle when playing claves is to allow at least one of them to resonate. The usual technique is to hold one lightly with the thumb and fingertips of the non-dominant hand, with the palm up.

Claves are very important in Cuban music. They are often used to play a repeating rhythmic figure throughout a piece, known as clave, that is also found in African music and Brazilian music.

Among the better known rock recordings featuring claves are the Beatles' recording "And I Love Her," and "Magic Bus" by the Who.

Utilization in classical and contemporary music

Steve Reich's Music for Pieces of Wood is written for five pairs of claves.

All content from Kiddle encyclopedia articles (including the article images and facts) can be freely used under Attribution-ShareAlike license, unless stated otherwise. Cite this article:
Claves Facts for Kids. Kiddle Encyclopedia.