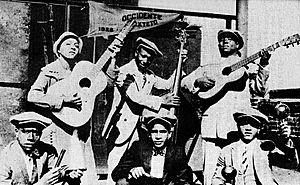 Cuban music comes from the Caribbean island of Cuba. Cuba has developed a wide range of musical styles, which draw on its cultural origins in Europe and Africa. Cuba's music has been hugely popular and influential throughout the world. It has been perhaps the most popular form of world music since the introduction of recording technology.

The music of Cuba, including the instruments and the dances, is mostly of European (Spanish) and African origin. Most forms of the present day are fusions and mixtures of these two great sources. The original inhabitants of Cuba died out, and little remains of their traditions.

Large numbers of African slaves and European (mostly Spanish) immigrants came to Cuba and brought their own forms of music to the island. European dances and folk musics included the zapateo, the fandango, the paso doble, the minuet, the gavotte, the contradanza, and the waltz appeared among the urban whites.

The African slaves and their descendants made many percussion instruments and preserved rhythms they had known in their homeland. The most important instruments were the drums. Also important are the claves, two short hardwood batons, and the cajón, a wooden box, originally made from crates. Claves are still used often, and cajons (cajones) were used widely during periods when the drum was banned.

The great instrumental contribution of the Spanish was their guitar, but even more important was the tradition of European musical notation and techniques of musical composition.

Fernando Ortíz described Cuba's musical innovations as arising from the interplay between African slaves settled on large sugar plantations and Spanish or Canary Islanders who grew tobacco on small farms.

The African beliefs and practices certainly influenced Cuba's music. Polyrhythmic percussion is an inherent part of African life & music, as melody is part of European music. Also typical is syncopation, which is heard in the cinquillo, a basic rhythm of the habanera, the danzón, the Argentine tango and other dances.

Also, in African tradition, percussion is joined to song and dance, and to a particular social setting. It is not simply entertainment added to life, it is life. The result of the meeting of European and African cultures is that most Cuban popular music is creolized (fused). This creolization of Cuban life has been happening for a long time, and by the 20th century, elements of African belief, music and dance were well integrated into popular and folk forms.

Cuban music has been immensely influential in other countries, contributing not only to the development of jazz and salsa, but also to Argentinian tango, Ghanaian highlife, West African afrobeat, and Spanish Nuevo flamenco.

In the 19th century, Manuel Saumell (1818–1870), was the father of Cuban criole musical development. He helped transform the European contradanza by adding African rhythmical elements, and had a hand in the habanera, and the danzon, two typically Cuban dance forms.

During the middle years of the 19th century, a young American musician came to Havana: Louis Moreau Gottschalk (1829–1869). He was a piano prodigy who had listened to the music and seen the dancing in Congo Square, New Orleans from childhood. His period in Cuba lasted from 1853 to 1862, with visits to Puerto Rico and Martinique squeezed in. He composed many famous pieces which were genuinely Cuban, as they drew on traditions of both whites and blacks.

From the 18th century to modern times, popular theatrical formats used, and gave rise to, music and dance. In addition to staging some European operas and operettas, Cuban composers gradually developed ideas which better suited their creole audience. Recorded music was the way for Cuban music to reach the world. The most recorded artist in Cuba up to 1925 was a singer at the Alhambra, Adolfo Colombo. Records show he recorded about 350 numbers between 1906 and 1917, of which very few survive today.

The first theatre in Havana opened in 1776. The first Cuban-composed opera appeared in 1807. Musical theater was hugely important in the nineteenth century and the first half of the twentieth century. Radio, which began in Cuba in 1922, helped the growth of popular music because it provided publicity and a new source of income for the artists.

Zarzuela is a small-scale light operetta format. Starting off with imported Spanish content, it developed into a running commentary on Cuba's social and political events and problems. A string of front-rank composers, such as Ernesto Lecuona, produced a series of hits for the theatres in Havana. Great stars like the vedette Rita Montaner, who could sing, play the piano, dance and act, were the Cuban equivalents of Mistinguett and Josephine Baker in Paris.

The guaracha is a genre of rapid tempo and with lyrics. It originated in Bufo comic theatre, The lyrics were full of slang, and dwelt on events and people in the news.

The contradanza is an historically important dance. It arrived in Cuba in the late 18th century from Europe. The contradanza is a communal sequence dance, with the dance figures in a set pattern. The tempo and style of the music was bright and fairly fast.

This, the child of the contradanza, was also danced in lines or squares. It was also a brisk form of music and dance which could be in double or triple time.

The habanera developed out of the contradanza in the early 19th century. Its great novelty was that it was sung, as well as played and danced.

The waltz (El vals) arrived in Cuba by 1814. It was the first dance in which couples were not linked by a communal sequence pattern. It was, and still is, danced in 3/4 time with the accent on the first beat. The waltz entered all countries in the Americas. The waltz has another characteristic: it is a 'travelling' dance, with couples moving round the arena.

A typical dance of the Cuban. A dance of pairs, involving tapping of the feet, mostly by the man.

In the 19th century here grew up in Santiago de Cuba a group of itinerant musicians, troubadors, who moved around earning their living by singing and playing the guitar. They were of great importance as composers, and their songs have been used in all types of Cuban music

The bolero has always been a staple part of the trova muusician's repertoire. The bolero proved to be exceptionally adaptable, and led to many variants. The bolero-son became for several decades the most popular rhythm for dancing in Cuba, and it was this rhythm that the international dance community picked up and taught as the wrongly-named 'rumba'.

The history of jazz in Cuba was obscured for many years; however it has become clear that its history in Cuba is virtually as long as its history in the USA.

A documentary movie, Buena Vista Social Club, directed by Wim Wenders, was released in 1999. It grossed $23 million worldwide by 2007. A younger generation had discovered why Cuban music was so popular.

All content from Kiddle encyclopedia articles (including the article images and facts) can be freely used under Attribution-ShareAlike license, unless stated otherwise. Cite this article:
Cuban music Facts for Kids. Kiddle Encyclopedia.