The Paris Conservatoire has been famous for music since it was formed in 1795. Nearly all famous French composers and performing musicians studied there, and many young musicians came from abroad to study. It was, and still is, one of the best places to study music in the world. 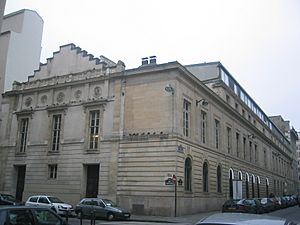 All content from Kiddle encyclopedia articles (including the article images and facts) can be freely used under Attribution-ShareAlike license, unless stated otherwise. Cite this article:
Conservatoire de Paris Facts for Kids. Kiddle Encyclopedia.