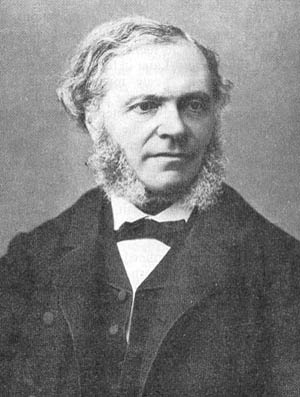 César Franck (born Liège, 10 December, 1822; died Paris, November 8, 1890), was a composer, organist and music teacher of Belgian and German origin who lived in France. He was one of the great musicians of his time. He was organist at the church of Sainte Clotilde in Paris for more than 30 years, and he taught many talented young musicians. Most of the music for which he is famous was composed when he was already quite old. 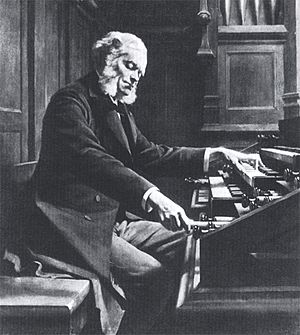 César Franck was born in Liège, a town which is now in Belgium. His father came from near the German-Belgian border and his mother was German. Because his father wanted him to be a concert pianist, he was sent to study at the conservatoire in Liege before going to the Paris Conservatoire in 1837. In 1842 his father made him come back to Liège so that he could practise for his career as a virtuoso pianist. He went back to Paris in 1844 and stayed there for the rest of his life. He told his father he did not want to be a concert pianist. This made his father very angry.

During his first years in Paris, Franck made his living by teaching and playing the organ. In 1848 he married. His parents came to the wedding although they were still angry with him for not wanting to be a pianist.

In 1858 he became organist at a new church called Saint Clotilde Basilica. He stayed there for the rest of his life. He decided to improve his organ playing, in particular in the use of pedals and in improvisation. At that time changes were being made in France to the pipe organ. Aristide Cavaillé-Coll was a very famous organ builder. He built an organ for Saint Clotilde Basilica and Franck gave the first recital on the new instrument in December 1859. Franck became famous for the way he improvised on the organ after the services. However, for many years he did not compose much.

Franck was becoming known as a teacher of organ and composition. His group of pupils became known as the bande à Franck (the Franck band). They included Henri Duparc, who introduced him to Alexis de Castillon. Franck became organ professor at the Paris Conservatoire. The students he taught included Vincent d'Indy, Ernest Chausson, and Louis Vierne. His organ works, especially the Grande Pièce Symphonique, were some of the best organ pieces to come from France (or anywhere else) in over a century. They helped to prepare for the French symphonic organ style, which was to include many famous composers from the late 19th century onwards: people such as Vierne, Charles-Marie Widor and Marcel Dupré.

In 1872 he wrote an oratorio Rédemption. It was not a success when it was first performed, but this was mainly due to the instrumental parts which had been badly copied, and by the famous conductor Edouard Colonne who conducted it very badly. The work became popular years later after Franck had died.

Franck was now starting to compose the works which made him really famous. He wrote a very large oratorio called Les Béatitudes. Later he wrote a Piano Quintet and the symphonic poems Le chasseur maudit and Les Djinns. His piano music included Prélude, choral et fugue and the Variations symphoniques. In 1885 he was awarded the cross of the Legion d’honneur. A year later he became president of the Société Nationale de Musique. He wrote a Violin Sonata (1886) and a Symphony (1888), which are probably his two most famous compositions now.

In 1890, Franck was knocked down by a horse tram while crossing the road. He died shortly afterwards, although he still managed to compose his Trois chorals for organ just before he died.

Many of Franck's works use "cyclic form", a way of making a long work with several movements sound like one piece by making the main theme or themes come back in later movements. He wrote in a Romantic style which was partly influenced by the music of Wagner and Liszt. Franck had big hands and when he wrote for the piano he often made the pianist play chords with very wide stretches.

He remains famous for just a small number of compositions written in his last years. One of his best known shorter pieces is the motet Panis Angelicus, which was originally written for tenor solo, but is more often heard sung by a soprano or treble.

All content from Kiddle encyclopedia articles (including the article images and facts) can be freely used under Attribution-ShareAlike license, unless stated otherwise. Cite this article:
César Franck Facts for Kids. Kiddle Encyclopedia.