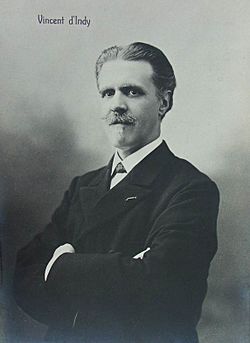 Paul Marie Theodore Vincent d'Indy (27 March 1851–2 December 1931) was a French composer and music teacher. Born in Paris, he was encouraged to learn music by his uncle who had studied with César Franck. D'Indy later also studied with Franck at the Paris Conservatoire. He liked the music of Lizst, Beethoven and Wagner. He went to the first performance of Wagner's Ring at Bayreuth in 1876. He organized performances of works by Rameau and Monteverdi whose work had been mostly forgotten. He was a very conservative in his views on music, and after his proposed changes to the Conservatoire were ignored, he set up his own music school, the Schola Cantorum in 1894.

He also wrote books including a biography of César Franck, and a book on how to write music.

All content from Kiddle encyclopedia articles (including the article images and facts) can be freely used under Attribution-ShareAlike license, unless stated otherwise. Cite this article:
Vincent d'Indy Facts for Kids. Kiddle Encyclopedia.