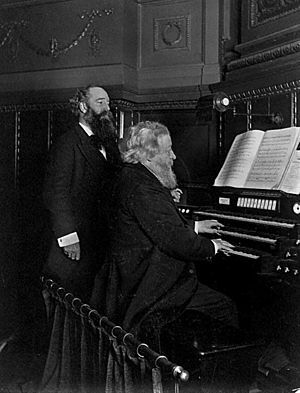 Alexandre Guilmant was born in Boulogne-sur-Mer. His father was an organist and organ builder, and gave young Alexandre lessons. Otherwise Alexandre was largely self-taught. He did study with Belgian teacher Jacques-Nicolas Lemmens, but by that time he was already a very good organist. From the 1860s he travelled widely in Europe, playing organs and becoming famous. Later he also visited the United States. In 1871 he became organist of the Trinité church in Paris. He kept this job until 1901.

Guilmant became well known in France as a teacher. Together with two other musicians, Charles Bordes and Vincent d’Indy, he started the Schola Cantorum, a private college where students could study music. He taught the organ there. Earlier he had succeeded Charles-Marie Widor as organ teacher at the Paris Conservatoire. His Conservatoire pupils included Joseph Bonnet, Nadia Boulanger and Marcel Dupré.

Guilmant did not just play the organ for church services. He became very famous for giving organ recitals. Often he played on organs which had been constructed by the brilliant organ builder Aristide Cavaillé-Coll. He helped to make these organs popular in France, and they were a very important influence on the way that organists composed music for their instrument.

Both Guilmant and Widor produced large works for the organ which they called “symphonies”. These usually had at least four movements each, and gave the player opportunities to use many different sound effects.

Guilmant wrote eight organ symphonies, as well as a symphony for organ and orchestra, and several shorter works for the same combination. He composed a great many miniatures, not just for organ but also for harmonium. This was useful for musicians in smaller churches which had a harmonium instead of a big organ. He wrote a book on how to play the organ, and for many years he edited collections of organ music which had been written by earlier composers.

All content from Kiddle encyclopedia articles (including the article images and facts) can be freely used under Attribution-ShareAlike license, unless stated otherwise. Cite this article:
Alexandre Guilmant Facts for Kids. Kiddle Encyclopedia.