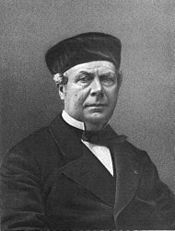 Aristide Cavaillé-Coll (born Montpellier, 4 February 1811; died Paris, 13 October 1899) was a French organ-builder. Most organists think of him as the greatest organ-builder of the 19th century, and one of the greatest who ever lived. He invented many new mechanical devices and his organs changed the way that composers could write for the instrument. César Franck, Alexandre Guilmant, and Charles-Marie Widor, in particular, were strongly influenced by the new type of organ that he was building.

Cavaillé-Coll grouped the stops of the organ into different families, so that the result was similar to the families of instruments in an orchestra. He made the lowest of the manuals (keyboards) the most important one. It was called the “Great” (French: “Grande Orgue”). The other manuals - there were usually two others, but sometimes three - could be “coupled” to the Great. He made changes to the English swell box, improved its operation, and divided the windchests on which the pipes were resting. This made it possible to have louder reed stops because of the higher wind pressure.

All content from Kiddle encyclopedia articles (including the article images and facts) can be freely used under Attribution-ShareAlike license, unless stated otherwise. Cite this article:
Aristide Cavaillé-Coll Facts for Kids. Kiddle Encyclopedia.