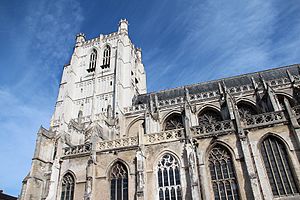 Notre-Dame de Saint-Omer was a cathedral, in Saint-Omer, France. Today, it is an ordinary church. This is because after the French revolution, the seat of the bishop was moved to Arras. It is still a historical monument. There was a small chapel where the Cathedral stands today. The chapel was built in the 8th century. Around 1052, a church was built on the site. Around 1200, a fire greatly damaged the church. Reconstruction in Gothic style started around 1263. Since it was a major work, it took a long time. The main construction works were done form the 13th to the 16th century. By that time, there was a college associated with the church. 1714 saw the installation of the bishop's seat; in 1717 the last touch-ups were done to the pipe organ. The woodwork and the bishop's seat date from 1753.

In 1792 there was the French Revolution. The Church was closed to worshippers. It was converted into a storage area. Unlike other churches, there was little vandalism done to it. The Concordat of 1801 saw the suppression of the diocese of Saint-Omer, it was moved to Arras.

All content from Kiddle encyclopedia articles (including the article images and facts) can be freely used under Attribution-ShareAlike license, unless stated otherwise. Cite this article:
Notre-Dame de Saint-Omer Facts for Kids. Kiddle Encyclopedia.