Saint Michael's Abbey (French: Abbaye Saint-Michel) is a Benedictine abbey in Farnborough, Hampshire, England. The small community is known for the quality of its liturgy, which is sung in Latin and Gregorian chant, its pipe organ, and its liturgical publishing and printing. St Michael's is the site of England's National Shrine to Saint Joseph.

Public tours of the Abbey take place every Saturday at 3pm, with the visit comprising a tour of the church and a visit to the crypt. Organ recitals are held on the first Sunday of the month, between May and October, at 3pm.

Following the fall of the Second French Empire in 1870, Napoleon III (1808–1873), his wife Empress Eugénie (1826–1920) and their son the Prince Imperial (1856–1879) were exiled from France and took up residence at Camden Place in Chislehurst, England, where Napoleon III died in 1873. He was originally buried at St Mary's Roman Catholic Church in Chislehurst, but, following the death of the Prince Imperial in 1879, the grief-stricken Empress Eugénie set about establishing a monument to her family.

She founded the Abbey in 1881 as a mausoleum for her husband and son, wishing that the burial site should be a place of prayer and silence. The Abbey included an Imperial Crypt, modelled on the altar of St Louis in France, where the Emperor had originally desired to be buried. Empress Eugénie was later buried alongside her husband and son. All three rest in granite sarcophagi provided by Queen Victoria.

The Abbey Church itself was designed in an eclectic flamboyant gothic style by the renowned French architect Gabriel-Hippolyte Destailleur, and it contains the thigh bone of St Alban, the largest relic of the saint in England. After the church and monastery were founded, they were initially administered by Premonstratensian Canons. In 1895, the Empress replaced them with French Benedictine monks from St Peter's Abbey, Solesmes. Dom Fernand Cabrol, a noted scholar, became prior and afterwards abbot (1903), remaining in the post until his death in 1937. Dom Henri Leclercq and a small group of French monks joined the house at the same time, and Leclercq and Cabrol collaborated for many years in scholarly endeavours. The medievalist and liturgist Dom André Wilmart (1876–1941) was a monk of the abbey.

The church's present two-manual organ was installed in 1905, built by Aristide Cavaillé-Coll & Company. The instrument's origins are shrouded in mystery. Although installed after the death of Cavaillé-Coll, it bears his name rather than that of his son-in-law Mutin, and the internal works are of a quality which identifies this model with the highest standards of workmanship of the high days of that company.

The community, once famed for its scholarly writing and musical tradition of Gregorian chants, became depleted in number by 1947, and most of the remaining monks dispersed to houses of the Solesmes Congregation, in particular Quarr Abbey. Farnborough was once more resettled, this time by a small group of English monks from Prinknash Abbey in Gloucestershire. The last French monk, Dom Leopold Zerr, for many years the abbey's organist, died in 1956. In 2006, the community elected the first English Abbot of Farnborough—the Right Reverend Dom Cuthbert Brogan.

The Catholic Central Library was set up by the Catholic Truth Society after the First World War. It was maintained for many years by the Graymoor Friars in Westminster until they were obliged to withdraw. It moved into the care of St Michael's Abbey in 2007 for a probationary period pending a final decision on its future. In 2007, it was renamed the Catholic National Library, and it is one of the finest collections of Roman Catholic books in England. In 2015, the collection was relocated to Durham University Library. 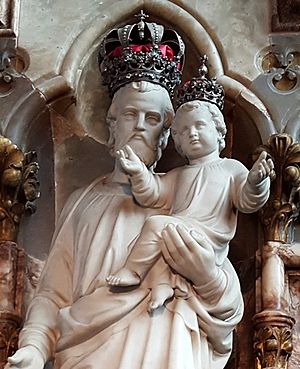 England's National Shrine to Saint Joseph at St Michael's Abbey is cared for by the monks of Farnborough. The statue of Saint Joseph, in a side chapel to the right of the high altar in the monastery church, initially belonged to the Mill Hill Fathers, founded by Herbert Vaughan in 1866. At Vaughn's request, Pope Pius IX granted a canonical coronation for the statue, conducted by Henry Cardinal Manning on the occasion of the dedication of the chapel of St Joseph's College on 13 April 1874.

The Missionary Institute of London was established in the late 1960s to consolidate training facilities for the various mission societies in Britain. St Joseph's College was closed in 2006. The property was subsequently sold, and the Society relocated to Maidenhead. Farnborough Abbey agreed to receive the Shrine's statue and altars, and the present National Shrine was erected in 2008. (A second statue of St Joseph, formerly at the entrance to the Mill Hill property, was sent to the shrine of Our Lady of Walsingham.)

All content from Kiddle encyclopedia articles (including the article images and facts) can be freely used under Attribution-ShareAlike license, unless stated otherwise. Cite this article:
St Michael's Abbey, Farnborough Facts for Kids. Kiddle Encyclopedia.