Farnborough is a town in north east Hampshire, England, part of the borough of Rushmoor and the Farnborough/Aldershot Built-up Area. Farnborough was founded in Saxon times and is mentioned in the Domesday Book of 1086. The name is formed from Ferneberga which means "fern hill".

Farnborough is situated in northeast Hampshire near the boundary with Surrey. The River Blackwater forms part of the boundary. It is located 34 miles (55 km) southwest of London and 16 miles (26 km) east of Basingstoke, directly to the south of junction 4 of the M3 motorway. The town lies at the centre of the Blackwater Valley conurbation, which includes Aldershot, Camberley, Yateley, Sandhurst, Frimley and Farnham.

Farnborough has incorporated several sizeable villages as it has expanded, including North Camp to the south, Cove and Southwood, which are now considered suburbs. It is contiguous with the garrison town of Aldershot to the south and with Frimley to the north. The council of the local government district of Rushmoor is based in the town. The district has borough status and also covers nearby Aldershot.

Within Farnborough the only naturally occurring significant flowing water is Cove Brook.

Tower Hill, Cove: There is substantial evidence that many years ago a large accumulation of Sarsen stones existed upon what later came to be known as Tower Hill.

The town is the home of St. Michael's Abbey. The Imperial Crypt there is the resting place of Napoleon III (1808–1873), Emperor of the French, and his wife, Eugénie de Montijo, (1826–1920) and their son, Napoléon, Prince Imperial. The Abbey was the home of the Catholic National Library from 2007 until it was relocated to Durham University Library in 2015.

Closely associated with Farnborough Airfield, situated between Farnborough and Fleet, is Samuel Franklin Cody. Cody, or Colonel Sam Cody as he was known, was one of the early pioneers of aviation. He died when he crashed his plane on Ball Hill, a site which is now within Qinetiq's Technology Park. A statue was unveiled on the 100th anniversary of his death, 7 August 2013. The statue is sited outside the FAST museum, home of the Farnborough Air Sciences Trust, surrounded by commemorative paving paid for by supporters. 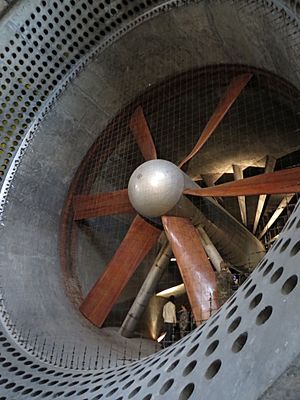 Farnborough Airfield is the site of the historic Royal Aircraft Establishment (RAE). Part of the old RAE, Farnborough's historic wind tunnels are now listed buildings, two in particular preserved. The first built in 1917 and the other, much larger, in 1935. The latter was used extensively for research into Concorde aerodynamics, Formula 1 cars until its closure in the early 1990s. The tunnels were open to the public during June and July 2014 until the end of the Farnborough International Airshow.

Sir Frank Whittle conducted much of his research into jet aircraft at the RAE. A replica Gloster E.28/39 (based on his prototype) is sited on a roundabout along Ively Road in tribute to its inventor. 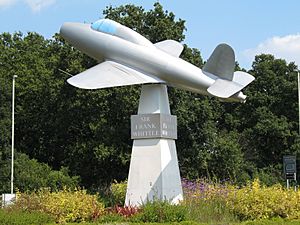 The Tumble Down Dick 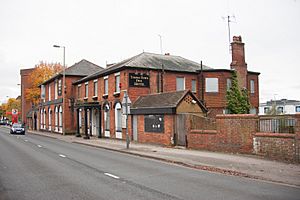 The Tumble Down Dick, before its conversion

An inn, The Tumble Down Dick Pub has been present on the A325 Farnborough Road since the 17th century. It was reputedly connected to Richard Cromwell, and was the central focus of the town before its 19th-century refocus toward North Camp and the town centre proper's 20th-century development. The pub closed in 2008 and was designated an "Asset of Community Value" in 2013 after local protest over a request for planning permission by McDonald's. The ACV status was later rescinded after an appeal by the site's owners. Permission was granted for the site's conversion to a McDonald's restaurant on 9 October 2013, and the building reopened with a new roof in October 2014 after being allowed to lie derelict for six years. During the renovation, an early advertisement for the Reading Simmonds Brewery was discovered and is now on full display on the side of the building.

Farnborough is near junctions 4 and 4a of the M3 motorway. The A325 enters the town from Frimley to the north, and continues into Aldershot to the south. The A331 runs north to south along the east side of the town.

Since 2003 Farnborough Airport has been a business airport operated by TAG Aviation. The Farnborough International Airshow takes place at the airport on even numbered years.

The centre of Farnborough includes the Kingsmead, Queensmead and Princesmead shopping precincts. In February 2007, Rushmoor Borough Council unveiled plans to renovate the centre of Farnborough over the next two decades. The town centre study outlines major changes to the council offices, Farnborough's main railway station, the local road network and the continuation of the improvements to Farnborough's town centre, including the development of a Discovery Centre (a Hampshire County Council initiative aimed at improving libraries in the county).

Work is underway to construct a new retail area with an entertainment complex. Several new blocks of flats have also been built adjacent to the town centre. Following a public consultation during the winter 2011–12, a 'town centre prospectus' outlining extensive redevelopment plans for the whole centre, including the building of a new cinema, a significant expansion of the available retail space, a new look for Queensmead shopping street and a community-led theatre or cultural venue was published.

On the edge of the town centre, is Farnborough Leisure Centre, which has a swimming pool, gym, indoor bowling, squash courts and ten pin bowling.

Rushmoor is twinned with:

All content from Kiddle encyclopedia articles (including the article images and facts) can be freely used under Attribution-ShareAlike license, unless stated otherwise. Cite this article:
Farnborough, Hampshire Facts for Kids. Kiddle Encyclopedia.