Camberley /ˈkæmbərliː/ is a town in Surrey, England, 31 miles (50 km) southwest of Central London, between the M3 and M4 motorways. The town is in the far west of the county, close to the borders of Hampshire and Berkshire; the boundaries intersect on the western edge of the town where all three counties converge on the A30 national route. It is the main town in the borough of Surrey Heath. Camberley's suburbs include Crawley Hill, Yorktown, Diamond Ridge, Heatherside, and Old Dean. 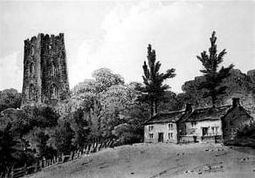 The Obelisk, painted by John Hassell in 1812

Before the 19th century, the area now occupied by Camberley was referred to as Bagshot or Frimley Heath. An Iron Age fort known as Caesar's Camp was situated to the north of this area alongside the Roman Road The Devil's Highway. The Intenarium Curiosum, published in 1724, describes a collection of Roman pottery around the area, and a further collection was discovered at Frimley Green in the late 20th century. In the Middle Ages, the area was part of Windsor Forest.

In the 17th century, the area along the turnpike road through Bagshot Heath (now the A30) was known as a haunt of highwaymen, such as William Davies - also known as the Golden Farmer – and Claude Duval. The land remained largely undeveloped and uncultivated due to a sandy topsoil making it unsuitable for farming. In A tour thro' the Whole Island of Great Britain, written between 1724 and 1726, Daniel Defoe described the area as barren and sterile; "a mark of the just resentment shew'd by Heaven upon the Englishmen's pride... horrid and frightful to look on, not only good for little, but good for nothing". A brick tower was built on top of The Knoll in the 1770s, by John Norris of Blackwater. It may have been used for communications but there is no firm evidence. The remains are now known as The Obelisk.

The town as it now stands has its roots in the building of The Royal Military College, which later became the Royal Military Academy, Sandhurst, in 1812. A settlement known as "New Town" grew in the area around the college which in 1831 was renamed Yorktown, after Prince Frederick, Duke of York and Albany. At this time, the population was 702. In 1848, the first parish church of St. Michael, Yorktown was built by Henry Woodyer, in an area formerly part of Frimley, itself only a chapelry of Ash.

Later, the Staff College was established to the east of the Academy, and a property speculator built the nearby Cambridge Hotel. The surrounding area became known as Cambridge Town, but was renamed "Camberley" in January 1877 to avoid confusion by the General Post Office with Cambridge in Cambridgeshire. The renaming of Camberley was mentioned in the 1963 film adaptation of William Golding's Lord of the Flies. The character Piggy states that the new name consisted of three parts; "Cam" taken from the original name of Cambridgetown, "ber" which means 'river', because there are many rivers in the area, and "ley" because it is a common ending for English town names in the area (as in neighbouring Frimley); although the name was actually derived from the "Cam" stream which runs through the town (mainly underground), "Amber" Hill which was marked on John Norden's map of the area in 1607 and "ley" usually meaning a clearing in the woodland. Hugh Edwards, the child actor who played Piggy, attended Camberley Primary School which was demolished to make way for the town centre redevelopment.

During the 19th century, Camberley grew in size. This was given added impetus with the arrival of the branch-line railway and railway station in 1878 and a reputation for healthy air, due to the vast number of pine trees, which were said to be good for those suffering from pulmonary disorders. By the end of the century the population had reached 8,400. Since then, the town has absorbed the original settlement of Yorktown, which is now regarded as part of Camberley.

The Southern Scott Scramble, the first known motorcycle scrambling event, took place on Camberley Heath on 29 March 1924. The event, won by A.B. Sparks, attracted a crowd in the thousands and is considered to be the first instance of what later developed in the sport of motocross. During the Second World War, the Old Dean common was used as an instruction camp of the Free French Forces. The Kremer prize was conceived in the Cambridge Hotel in Camberley in 1959 after Henry Kramer toured a Microcell factory.

Barossa Golf Club (now defunct) was located on Barossa Common. The club was founded in 1893 and continued until WW2.

The Old Dean housing estate was built in the 1950s on the "Old Dean Common" for residents of heavily bombed Surrey-area's homeless after World War II. Many of the roads on that half of the Old Dean are named after areas of London, with the others named after places on the common.

In 1969 there was an outbreak of rabies when a dog, just released from a sixth month quarantine after returning from Germany, attacked two people on Camberley Common. The scare resulted in restriction orders for dogs and large-scale shoots to carry out the destruction of foxes and other wildlife.

After debate and delay (plans having been discussed for over half a decade), in 2006, a 7-acre (2.8 ha) mixed-use development west of Park Street named The Atrium was built of residential, leisure and retail buildings with wide pedestrianised areas and 683 public parking spaces. Its 217 mid-rise apartments split into courtyards in the Barcelona style. Fourteen new retail units face directly onto Park Street, opposite the Main Square shopping centre. Park Street has been pedestrianised and landscaped as part of the development. Leisure facilities include a nine-screen cinema, a bowling alley, a health and fitness club, cafés and restaurants. Various elements of The Atrium was opened during 2008, with the final elements, the main cinema and bowling alley, opening in October and November 2008, respectively.

In 2009, the town's households were named by Experian as having the highest carbon footprint in the UK, estimated at 28.05 tonnes per household per year (compared to 18.36 tonnes for the lowest, South Shields).

Camberley is in the far west of Surrey, adjacent to the boundaries of Hampshire's Hart district and Berkshire's Bracknell Forest district. It lies directly between the A30 national route and M3 motorway (junction 4 exit). It is at the northern edge of the Blackwater Valley conurbation, 5 miles (8.0 km) north of Farnborough, 8 miles (13 km) south of Bracknell and 17 miles (27 km) east of Basingstoke.

The smaller town of Frimley, being so close to Camberley, is often regarded as part of the town, although the two are, for the most part, separated by the M3 motorway. Frimley has its own town centre, a major regional hospital (Frimley Park) and extensive suburban areas. In the 19th century, Yorktown and Camberley were in the ecclesiastical parish of Frimley.

The neighbouring town of Blackwater, 3 km (1.9 mi) to the west is also considered by some to be a suburb of Camberley, although it is in the Hart District of Hampshire and has its own town council (together with Hawley). The same could be said for Sandhurst which is home of "The Meadows" retail park which is in the Bracknell Forest borough of Berkshire. The Royal Military Academy Sandhurst is located in Camberley, despite the name suggesting otherwise.

The town has its own public library, cinema and theatre and is home to the Surrey Heath Borough Council offices. The Vue cinema opened in The Atrium development in late 2008 the year after an older cinema, owned by Robin's Cinemas, and situated on London Road some distance from the town centre, burned down in 2007 after having closed in 2003.

Camberley and the Royal Military Academy Sandhurst are featured in a Doctor Who comic story entitled "The Warkeeper's Crown". 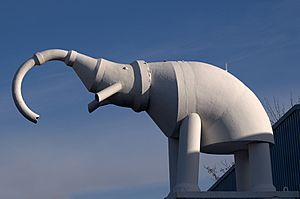 A familiar landmark in Camberley is the concrete pipe white elephant which is on the A30 approaching The Meadows roundabout. This was created as advertising by a pipe company which rented the premises. When they closed down, the upkeep of the elephant was written into the tenancy contract, so subsequent businesses have continued to look after it.

Camberley railway station is immediately south of the commercial centre on the Ascot to Guildford line, connected to Guildford, Aldershot in the south and Ascot to the north with two trains per hour in each direction.

Between the radial South Western Main Line and Waterloo to Reading Line, capacity and stock constraints limit the direct services to and from London Waterloo to peak hours, running via Ascot and increasingly urban towns of Staines upon Thames, Twickenham then Richmond. In non-peak times passengers from Camberley change at Ascot or Ash Vale for London.

A few miles south-west and connected also by bus, Farnborough station provides direct trains to Waterloo, Basingstoke, the medieval city of Winchester and on a lower frequency, Portsmouth.

Directly west Blackwater station (close to the A30) on the North Downs Line is operated by [ Great Western Railway]], with trains running to Reading, Guildford, Redhill and Gatwick Airport.

Bus companies operating routes through Camberley include: First Berkshire & The Thames Valley to Bracknell; Arriva Guildford & West Surrey to Guildford via Woking; Stagecoach South to Aldershot, Basingstoke and Farnborough; and Dicksons Travel to Staines and Woking.

Camberley's northern parts such as College Town are astride the old south-west road (A30) and the whole settlement is between Junctions 3 and 4 of the M3 motorway.

The A30 leaving Camberley to the north for Bagshot has a large junction named the "Jolly Farmer Roundabout" named after the Public House that stood on it. The pub was originally called "The Golden Farmer", after a local farmer and highwayman, William Davis.

The average level of accommodation in the region composed of detached houses was 28%, the average that was apartments was 22.6%. The remaining households not accounted for above were temporary/caravans and shared households.

The 2011 census showed that 63.4% of Surrey Heath residents considered themselves Christian. Camberley has churches of several Christian denominations, mostly Anglican, many of which are members of a Churches Together group. There is also a Jehovah's Witness Kingdom Hall within the town.

A local Bengali Welfare Association has maintained an Islamic centre in Camberley since 1996. Plans to convert the former school building into a more traditional Mosque were subject to intense debate, resulting in the withdrawal of planning permission in early 2010.

All content from Kiddle encyclopedia articles (including the article images and facts) can be freely used under Attribution-ShareAlike license, unless stated otherwise. Cite this article:
Camberley Facts for Kids. Kiddle Encyclopedia.