Frimley is a town in the Borough of Surrey Heath in Surrey, England, approximately 30 mi (48 km) southwest of central London. The town is of Saxon origin, although it is not listed in Domesday Book of 1086.

Train services to Frimley (on the line between Ascot and Aldershot), are operated by South Western Railway.

The name Frimley is derived from the Saxon name Fremma's Lea, which means "Fremma's clearing". The land was owned by Chertsey Abbey from 673 to 1537 and was a farming village. More recently it was a coach stop on a Portsmouth and popular Southampton road for about four hundred years. 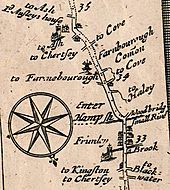 Frimley was not listed in Domesday Book of 1086, but is shown on the map as Fremely, its spelling in 933 AD.

Frimley Lunatic Asylum was opened in 1799; it catered for both male and female patients, and received four patients from Great Fosters, Egham. Magistrates visited in 1807 and ordered the proprietors to stop chaining the patients.

An 1811 inventory from Frimley, a Workhouse, can be seen on the Surrey County Council website.

The present St. Peter's Church was built in 1826 replacing earlier buildings. The building has a balcony running around three sides of the interior. Dame Ethel Smyth once preached from the pulpit.

In 1904, the Brompton Hospital Sanatorium was established in Frimley to treat tuberculosis patients; it closed in 1985. Dr Marcus Sinclair Paterson (1870–1932) was the first medical superintendent, and he developed a system of treatment called 'graduated labour' which generated a lot of interest from other health professionals. The treatment used controlled levels of physical activity.

In 1959 the Cadet Training Centre at Frimley Park was formed following the 1957 publication of the Amery Report.

The main shopping street includes a branch of Waitrose and some smaller shops, several restaurants, banks, charity shops, a post office, a number of estate agents, solicitors, opticians, betting shops, an insurance broker and two public houses, the Railway Arms and the White Hart. Frimley Park Hospital is situated in the town. One of the major employers in the town is BAE Systems, which occupies a building off Lyon Way. Siemens opened its main UK headquarters in Frimley in 2007.

The usual number of residents in the ward, 6,178, belies the observation that this is the largest and most commercial settlement of the GU16 postcode which also covers the southernmost, Heatherside/Parkside, neighbourhoods Camberley of (its post town) and the distinct villages of Frimley Green, Mytchett and Deepcut.

The working population worked as set out below in the official industry categorisations in 2011:

The ward is relatively representative of the nation as a whole in terms of national identity:

The proportions of those retired, unemployed and who were students in 2011 were extremely close to the regional average whereas those in the economically inactive (other) category were fewer:

Those who replied that again there were no people in the household with English as their main language formed a proportion of the population 0.1% less than the national average.

The town is situated close to the junction of the A325 Farnborough Road and A331 Blackwater Valley Relief Road, which provides a link to the M3 Motorway junction 4. 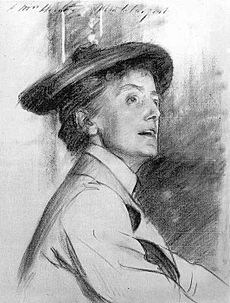 Daphne du Maurier wrote most of her fourth novel, Jamaica Inn, in 1935 in Frimley where her soldier husband Frederick (Boy) Browning was based.

Dame Ethel Smyth, English composer and suffragette grew up in nearby Frimley Green and later purchased One Oak Cottage in Frimley. Her family moved to Frimley Green in 1867 when her father was given command of the Royal Artillery at Aldershot.

Notable people buried in the churchyard of St. Peter's Church, Frimley include:

In one of the Just William books by Richmal Crompton, William visits an aunt in Frimley for a few days.

Charles Kingsley refers to "a series of letters on the Frimley murder" in his Alton Locke, Tailor and Poet.

There is a brief mention of Frimley in Stephen King's Nightmares & Dreamscapes in the short story Crouch End. It reads: 'He did indeed move into council housing, a two-above-the-shops in Frimley'.

Frimley Town Football Club was formed over 100 years ago. It runs four teams, and the first team competes in the Senior Division of the Aldershot & District Football League. The club is based at Chobham Road recreation ground.

Frimley Green, a neighbouring village, has hosted the British Darts Organisation's (BDO) World Professional Darts Championship since 1986 each January in the Lakeside complex.

All content from Kiddle encyclopedia articles (including the article images and facts) can be freely used under Attribution-ShareAlike license, unless stated otherwise. Cite this article:
Frimley Facts for Kids. Kiddle Encyclopedia.