Richmal Crompton Lamburn was born in Bury, Lancashire, the second child of the Rev. Edward John Sewell Lamburn, a Classics master at Bury Grammar School and his wife Clara (née Crompton). Her brother, John Battersby Crompton Lamburn, also became a writer, remembered under the name John Lambourne for his fantasy novel The Kingdom That Was (1931) and under the name "John Crompton" for his books on natural history.

Richmal Crompton attended St Elphin's Boarding School for the daughters of the clergy, originally based in Warrington, Lancashire. She later moved with the school to a new location in Darley Dale, near Matlock, Derbyshire in 1904. In order to further her chosen career as a schoolteacher, she won a scholarship to Royal Holloway College, part of the University of London in Englefield Green, Surrey. Crompton graduated in 1914 with a BA honours degree in Classics (II class). She took part in the Women's Suffrage movement.

In 1914, she returned to St Elphin's as a Classics mistress and later, at age 27, moved to Bromley High School in southeast London where she began her writing in earnest. Cadogan (1993) shows that she was an excellent and committed teacher at both schools. Having contracted poliomyelitis, she was left without the use of her right leg in 1923. She gave up her teaching career and began to write full-time. Later in her forties, she suffered from breast cancer and had a mastectomy.

She never married and had no children; she was an aunt and a great-aunt. Her William stories and her other literature were extremely successful and, three years after she retired from teaching, Crompton was able to afford to have a house (The Glebe) built in Bromley Common for herself and her mother, Clara.

In spite of her disabilities, during the Second World War she volunteered for the Fire Service.

Crompton died in 1969 at the age of 78, after a heart attack, in Farnborough Hospital. Crompton had fallen ill on the drive home from visiting her niece's home in Chelsfield, Kent. After feeling unwell during the night, Crompton telephoned friends the next morning and died within an hour of being taken to hospital.

Crompton left the copyright of all her books to her niece, Mrs Richmal C. L. Ashbee of Chelsfield, Kent; along with £57,623. 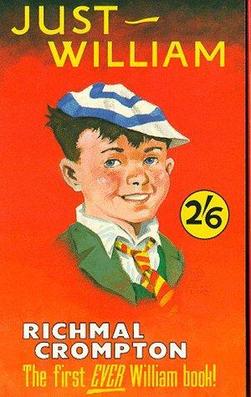 Crompton's best known books are the William stories, about a mischievous 11-year-old schoolboy and his band of friends, known as "The Outlaws". Her first published short story featuring William was "Rice Mould Pudding", published in Home Magazine in 1919. (She had written "The Outlaws" in 1917, but it was not published until later.) In 1922, the first collection, entitled Just William, was published. She wrote 38 other William books throughout her life. The last, William the Lawless, was published posthumously in 1970.

The William books sold over twelve million copies in the United Kingdom alone. They have been adapted for films, stage-plays, and numerous radio and television series. Illustrations by Thomas Henry contributed to their success.

Crompton saw her real work as writing adult fiction. Starting with The Innermost Room (1923), she wrote 41 novels for adults and published nine collections of short stories. Their focus was generally village life in the Home Counties. Though these novels have the same inventiveness and lack of sentimentality as the 'William' books, after the Second World War, such literature had an increasingly limited appeal.

Even William was originally created for a grown-up audience, as she saw Just William as a potboiler (Cadogan, 1993). She was pleased by its success, but seemed frustrated that her other novels and short stories did not receive the same recognition. Her first published tale was published in The Girl's Own Paper in 1918, concerning a little boy named Thomas, a forerunner of William who reacts against authority. Crompton tried several times to reformulate William for other audiences. Jimmy (1949) was aimed at younger children, and Enter – Patricia (1927) at girls. Crompton wrote two more Jimmy books, but no more Patricia, and neither was as successful as William.

As for the source of inspiration of the main character William, Crompton never disclosed it and therefore different opinions exist. Presumably it was the result of mixing observations of children she worked with or knew with her own imagination. According to the actor John Teed, whose family lived next door to Crompton, the model for William was Crompton's nephew Tommy:

As a boy I knew Miss Richmal Crompton Lamburn well. She lived quietly with her mother in Cherry Orchard Road, Bromley Common. My family lived next door. In those days it was a small rural village. Miss Lamburn was a delightful unassuming young woman and I used to play with her young nephew Tommy. He used to get up to all sorts of tricks and he was always presumed to be the inspiration for William by all of us. Having contracted polio she was severely crippled and confined to a wheelchair. Owing to her restricted movements she took her setting from her immediate surroundings which contained many of the features described, such as unspoilt woods and wide streams and Biggin Hill Aerodrome, very active in the Twenties.

Crompton's fiction centres around family and social life, dwelling on the constraints that they place on individuals while also nurturing them. This is best seen in her depiction of children as puzzled onlookers of society's ways. Nevertheless, the children, particularly William and his Outlaws, almost always emerge triumphant.

The William books have been translated into nine languages.

The publication dates are for the UK. 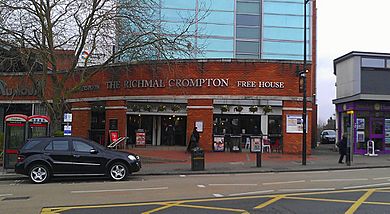 "The Richmal Crompton", a Wetherspoons pub in Bromley named after the local author

Richmal Crompton's archives are held at Roehampton University, London and at Wat Tyler Country Park, Pitsea, where some members of her family lived. A public house in Bromley is named in her honour and contains framed prints and texts from the William series.

The novel and TV series Good Omens by Neil Gaiman and Terry Pratchett was inspired by Just William, with the premise being the Antichrist in the place of William, and his gang ("The Them") in place of "The Outlaws". The initial working title for the novel was "William the Antichrist". Another of Pratchett's works, the Johnny Maxwell series, was also inspired by Just William, Pratchett stating that it was based very loosely on an idea of what Just William would be like in a 1990s setting.

All content from Kiddle encyclopedia articles (including the article images and facts) can be freely used under Attribution-ShareAlike license, unless stated otherwise. Cite this article:
Richmal Crompton Facts for Kids. Kiddle Encyclopedia.