Darley Dale, also known simply as Darley, is a town and civil parish in the Derbyshire Dales district of Derbyshire, England, with a population of around 6,000. It lies north of Matlock, on the River Derwent and the A6 road. The town forms part of the urban area of Matlock and acts as a commuter town for workers there.

This article contains information on the area covered by the current civil parish of Darley Dale. The main built-up area of the parish extends for 2 miles along the A6 road north-west of Matlock, starting near the ARC Leisure Centre and ending near Stancliffe Quarry. It is bounded on the south-west by the River Derwent and extends over the hills and moors to the north-east as far as Darwin Forest Country Park. 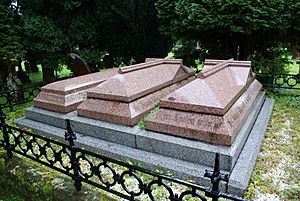 The grave of Sir Joseph Whitworth, in the grounds of St Helen's parish church (Whitworth's grave is the central tomb)

Situated in the Churchtown part of Darley Dale, this Grade II* listed parish church dates from the 12th century. The church was restored in 1877. The church tower was restored and strengthened in 1902-03. Outside the church, in the south wall of the chancel, the four periods of architecture, Norman, Early English, Decorated and Perpendicular, can be seen. Inside the church, there are monuments to Sir John de Darley who was lord of the manor in fourteenth century. There is also a memorial window to the famous engineer, Sir Joseph Whitworth, who lived in the parish and is buried in the churchyard. The Yew Tree, which is situated just outside the south porch, is claimed to be 2000 years old and is one of the thickest in England with a girth of around 33 feet, 4 feet from the ground. It is claimed that this yew tree marked a sacred site in pre-Christian times.

Situated on Chesterfield Road in Two Dales, this was built in 1827. Also known as Hudson's Chapel. Superseded by the Dale Road Methodist Church in 1904. After use as a Sunday School, it was converted into a bakery.

Situated on Greenaway Lane, this was built in 1848. Superseded by the nearby Hackney Methodist Church in 1908. After a period in use as a Sunday School, it is no longer used as a place of worship.

Situated on Dale Road, close to the Whitworth Institute, this was built in 1904. It superseded the Wesleyan Chapel in Two Dales. 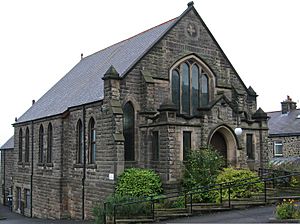 This was built in 1908 to replace a smaller Primitive Methodist Chapel nearby on Greenaway Lane.

Situated on Moor Lane, this was built in 1912 to replace an earlier building on Lumb Lane. It is part of the same circuit as Dale Road Methodist Church. 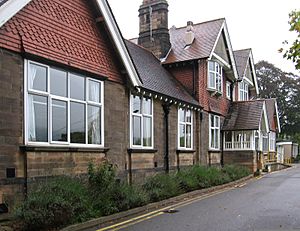 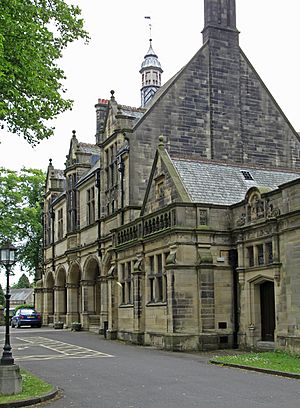 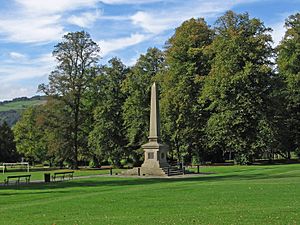 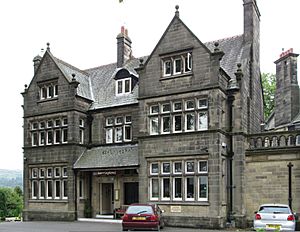 Sir Joseph Whitworth, the nineteenth century machine toolmaker and engineer, lived at Stancliffe Hall in Darley Dale for the last 13 years of his life. He died at Monte Carlo in 1887, aged 83, and was buried at St. Helen's Church. During his lifetime he drew up plans for the village and these were fulfilled thanks to generous endowments from his estate. He had, according to his biographer Terence Kilburn, hoped to build a Comprehensive Village College but his wife, Louisa, preferred a Social Centre. The Institute and Park was a compromise and is just one of the things the Whitworths did to enrich the lives of Darley Dale's inhabitants.

Lady Louisa Whitworth built Whitworth Cottage Hospital, the first of two major building projects in Darley Dale, following the death of her husband and it was opened in 1889. It is still in use as an NHS hospital in 2015, providing a minor injuries unit, two urgent care wards and some community health services.

The opening to the public of The Whitworth Institute in September 1890 marked the beginning of Lady Louisa’s second major project in Darley Dale. The Institute comprised an indoor swimming pool, an assembly hall, various reading and committee rooms and eventually a library, a billiard room, a museum of natural history, a convenient hotel (The Whitworth Hotel, now "Barrington's") and a landscaped park. The Whitworth Institute was given to the people of Darley Dale and in 2009/10 underwent a £1.7M renovation to ensure its continued use for future generations.

The park provides a variety of sporting activities with soccer and cricket pitches, a bowling green and a skateboard arena. Whitworth Park also provides over ten acres of landscaped grounds with pathways along tree-lined avenues. There is also a shallow lake, The centrepiece of the park is an obelisk commemorating Sir Joseph Whitworth. In 2003 the Park was the subject of a £750,000 refurbishment.

The town was the winner of the 2003 Britain in Bloom, in the category of 'Large Village' The prize was presented by local marine expert Ben Goodwin.

A biennial arts festival, the Darley Dale Arts Festival, is held in July in odd-numbered years.

At the bottom of Station Road lies Darley Dale railway station. National rail services ceased in the 1960s however the station is now occupied by the railway and heritage preservation group Peak Rail. From there, a heritage steam service operates south to Matlock and north to Rowsley South, with a route distance of approximately five miles.

An annual transport festival, the Darley Dale Festival of Transport, is held at the bottom of Station Road every September.

Nearby is the holiday resort Darwin Forest Country Park.

In nearby Two Dales, Ladygrove Mill was built for spinning cotton by Abraham Flint, but converted to flax spinning in 1789 by Daniel Dakeyne of Knabb House. It was expanded by his sons, Edward and James, who built a series of three dams on the Sydnope Valley rising to 96 feet. To cope with the water pressure, they invented a revolutionary water-pressure powered "disc engine", which they patented in 1830 as the Dakeyne hydraulic disc engine. It was the progenitor of a type, now known as a "nutating disc engine" (which has been the subject of entrepreneurial interest in the 21st century). The mills and equipment have virtually disappeared but the remains of the dams can still be seen.

The Plough Inn public house in Two Dales was the reason behind former England international footballer Eddie Shimwell's transfer from Sheffield United to Blackpool in December 1946. Shimwell wanted to buy the pub, but Sheffield United would not allow it, due to their ban on players becoming publicans, so the full-back put in a transfer request.

All content from Kiddle encyclopedia articles (including the article images and facts) can be freely used under Attribution-ShareAlike license, unless stated otherwise. Cite this article:
Darley Dale Facts for Kids. Kiddle Encyclopedia.