Matlock is the county town of Derbyshire, England. It is situated at the south eastern edge of the Peak District. The town is twinned with the French town Eaubonne. The former spa resort Matlock Bath lies immediately south of the town on the A6. The civil parish of Matlock Town had a population in the 2011 UK census of 9,543. The population of the wider Matlock urban area is approximately 20,000 (including Darley Dale, Tansley, Hackney and Matlock Bath). The Matlock area is considered to include Wirksworth, owing to the close proximity of the towns. This would bring the area's population closer to 30,000.

Matlock is nine miles (14 km) south-west of Chesterfield, and in easy reach of the cities of Derby (19 miles), Sheffield (20 miles), and Nottingham (29 miles); the Greater Manchester conurbation is 30 miles away. Matlock is within the Derbyshire Dales district, which also includes the towns of Bakewell and Ashbourne, as well as Wirksworth. The headquarters of Derbyshire County Council are in the town.

The name Matlock derives from the Old English mæthel (or mæðel), meaning assembly or speech, and āc, meaning oak tree; thus Matlock means 'moot-oak', an oak tree where meetings are held. In the Domesday Book of 1086 it was recorded as Meslach and in 1196 it was Matlac. It is a former spa town that lies on the River Derwent, and has prospered from both the hydrotherapy industry and the cloth mills constructed on the river and its tributary Bentley Brook.

It was an unimportant collection of small villages in the Wirksworth Hundred — Matlock Town, Matlock Green, Matlock Bridge, Matlock Bank — until thermal springs were discovered in 1698. The population increased rapidly in the 1800s, largely because of the popular hydros which were being built. At one stage there were around twenty hydros, mostly on Matlock Bank, the largest built in 1853 by John Smedley. This closed in 1955, and re-opened in 1956 as the headquarters of the Derbyshire County Council. Matlock is also home to the Derbyshire Dales District Council as well as Matlock Town council.

The main physical features of the Matlock area are the hills and watercourses. The height of the town (above mean level) varies from 91m at Causeway Lane (in the valley bottom) to 203m at the top of Wellington Street. Matlock is overlooked by Riber Castle at 260m from the south-east and by Masson Hill at 339m from the south-west. The first human settlement in the area was in what is now known as Old Matlock or Matlock Green. This was where the Bentley Brook joined the River Derwent. When the town grew in the late 19th century, the town spread up the steep hillsides to the north-east of the narrow valley bottom. 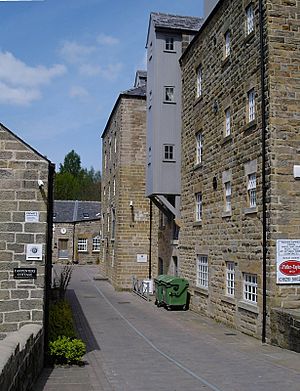 Various industries made use of the natural features: 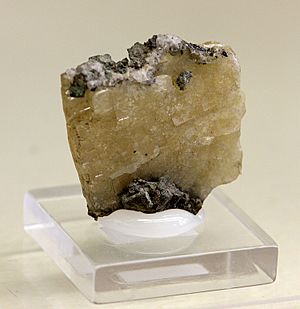 Specimen of Matlockite in the Mineralogical Museum, Bonn

This geology has been exploited by the quarrying and mining industries. The sandstones and gritstones have been quarried as building materials (e.g. at Bentley Brook Quarries) and the limestones for building materials and the manufacture of lime (e.g. at Harvey Dale Quarries). The igneous intrusions gave rise to valuable minerals which have been mined (e.g. in the Bonsall area), particularly for lead. A very rare lead halide mineral called Matlockite was first discovered at nearby Bage Mine in the early 1800s, and is named after the town.

The route of the River Derwent downstream (south) of Matlock is especially interesting to geologists in that it appears to have cut its way through a limestone gorge below High Tor (120m above river level), rather than follow the "simpler" way to the east. It is thought that landslips and/or glaciation may have had an influence over how the present route of the river was established.

The area on the western edge of the town, bounded on the north and east by Old Hackney Lane, Hurds Hollow, and Dimple Road, and on the south by Bakewell Road, is named as Dimple, on the Ordnance Survey map. 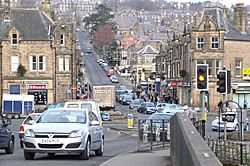 Matlock taken from Matlock Bridge - looking up the hill of Bank Road across Crown Square (prior to bridge one way system).

In 1893, Matlock Cable Tramway, a cable tramway was built up Bank Road from Crown Square at Matlock Bridge to Wellington Street (at the top of Bank Road) with a stop halfway up at Smedley Street where Smedley's Hydro (built by John Smedley) was situated. Conceived by Job Smith, the tram was inspired by San Francisco's famous cable cars, and cost £20,000. When it was built it was the steepest tramway in the world at a gradient of 1 in 5½, and it rose 300 feet (91 m). The fare was tuppence up, penny down. It closed in 1927 after losing business to cars and buses.

In 1849, the railway came to Matlock. Matlock railway station was opened on the Manchester, Buxton, Matlock and Midlands Junction Railway, later the Midland line between London and Manchester, until the section between Matlock and Buxton was closed in 1968 following the Beeching cuts. Network Rail considered re-opening the line, with a study carried out by the county council. Although it proved to be unfeasible in the short term, the track bed will be kept free of development as the study showed that the line could be economically viable from around 2025. The section from Wye Dale (about 3 miles (4.8 km) east of Buxton) to Coombs viaduct, a point about a mile south-east of Bakewell, has now become the Monsal Trail, an 8.5-mile (13.7 km) walk and cycle trail.

Trains still run between Matlock and Derby on the Derwent Valley Line. Peak Rail, a preserved railway, runs steam trains on a section of the closed line between Matlock, Darley Dale and Rowsley. Previously it used its own station, Matlock Riverside, a short distance to the north of the mainline station, however as of 2011 both Peak Rail and trains on the Derwent Valley Line share the same station. 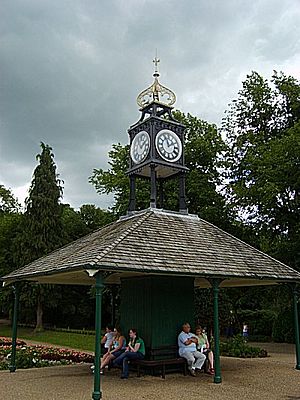 The old tram shelter in the park

Hall Leys Park is a Victorian public park in the centre of Matlock, Derbyshire which opened in 1898. It lies between the River Derwent to the south and Causeway Lane to the north. The park has many facilities and in 2004–2005 underwent major regeneration as part of the Matlock Parks Project with funding from the Millennium Commission.

At the Crown Square/Matlock Bridge end of the park there is the town's war memorial and a wishing well. Beside this there is the shelter from the former cable tramway which was moved to the park when the tramway ceased to operate in 1927.

Moving away from Crown Square there is, next, a large grass area and some tennis courts. As part of the refurbishments which took place, the old grass tennis courts were replaced with a skateboard park. 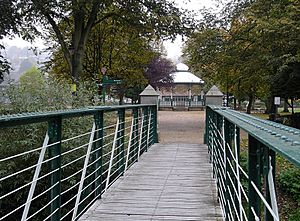 In the centre of the park is the Victorian bandstand which is used regularly in the summer months by local brass bands and for events such as the annual Matlock Victorian Christmas Weekend - held on the first weekend of December. Beside the bandstand is a footbridge over the River Derwent which has markings indicating the height of several floods that hit the town in the 1960s and 1970s. The café, on the opposite side of the bandstand, has similar markings for other floods.

Hall Leys Park is now a central part of the town's flood protection. The wall which surrounds the northern side of the park has the ability to have the footways sealed with sheets of wood which would dam the progress of any overflow from the river and turn the entire park into a large reservoir. Further down the park there is a putting green and a Crown Green Bowls green.

A boating lake, with several small islands, is home to a large number of birds, including ducks and moorhens as well as being host to the longest running pleasure boats in the country.

A miniature railway runs half the length of the park along the river but, due to the lack of any turning space, the return journey is made in reverse.

At the far end of the park is a children's playground which was significantly upgraded in 2005.

Hall Leys Park is occasionally the site for visiting "Continental Markets" and, since the summer of 2006, regular "Farmers' Markets". It is also the centre of the Matlock Victorian Christmas Weekend held annually on the first weekend of December.

Bank Road runs from Crown Square up Matlock Bank, a steep hill which gives the road its name, to Wellington Street. Although many consider the whole incline to be Bank Road, just over halfway up beyond Smedley Street the road is called Rutland Street. Bank Road has many local landmark buildings along it - from the bottom of the hill (Crown Square) travelling north: 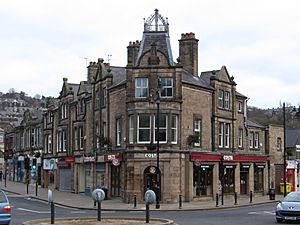 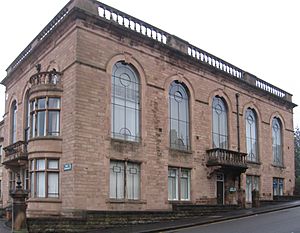 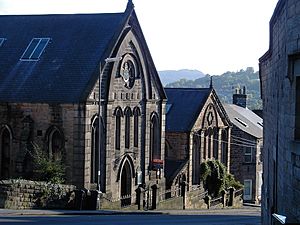 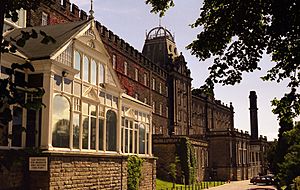 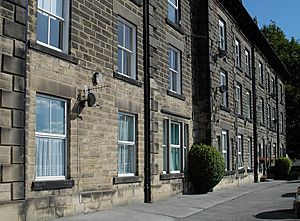 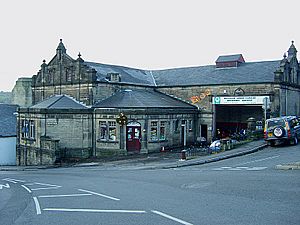 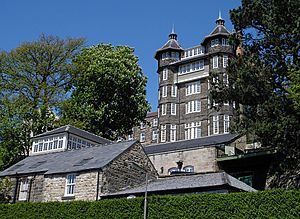 Dale Road runs all the way from Matlock Bridge (road bridge over the River Derwent) to North Parade in Matlock Bath. It forms part of the Derby to Manchester road (A6) and has very many bends. Dale Road, like Bank Road (see previous section), contains a large number of examples of Victorian architecture, although only four are listed by English Heritage. However all buildings on Dale Road are included in two conservation areas created by Derbyshire Dales District Council. These conservation areas are called "Matlock Bridge" (from the bridge over the Derwent to the railway bridge over Dale Road), then "Matlock Dale" to the outskirts of Matlock Bath. In this section, the main features of Dale Road are described, starting at Matlock Bridge and then proceeding in a southerly direction until the High Tor Hotel. 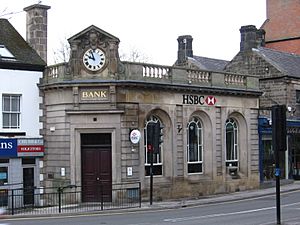 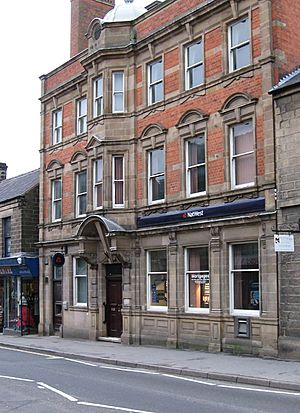 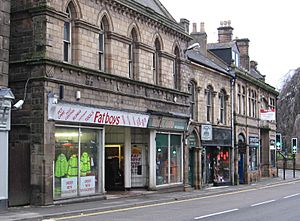 Market Hall with Queens Head beyond 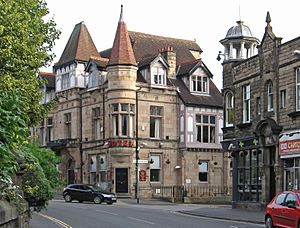 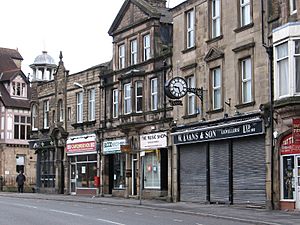 Evans Jeweller, with Lime and Olde Englishe Hotel beyond 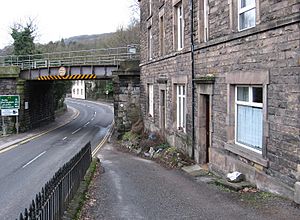 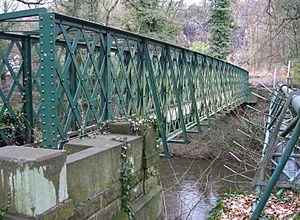 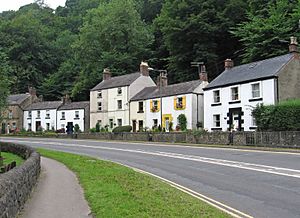 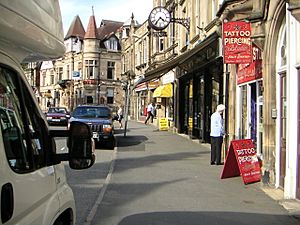 For over 10 years, the council had proposed to allow a Sainsbury's supermarket to be built in Cawdor Quarry, a disused quarry next to the railway station. In early 2007 building work started, and it opened 4 October 2007. A new access road with its own bridge over the River Derwent allows the A6 to bypass the town centre, while the old bridge has been restricted to one-way traffic (out of town) and allows pedestrian access to the train station, a newly built bus station and the supermarket from the town centre. Several bus routes continue to serve only the old Bus Station on Bakewell Road, making Matlock one of the smallest towns in Britain to boast two bus stations.

There has been a negative image of Matlock Town centre due to the limited retail offer for a town of Matlock's size which was identified in the Matlock Masterplan - a document produced by the district council. There has been a worry that many locals now choose to shop in neighbouring towns due to this perceived problem. The local council had a wider development planned for the future with key development sites on Bakewell Road, Firs Parade and Imperial Road which were identified in 2007 in the masterplan.

In 2010, Crown Square was updated with the replacement of pavements and street furniture intended to provide a new look more appropriate to the conservation area, the old tarmac pavements and traffic island being rebuilt in local sandstone, barriers replaced with heritage bollards and all the street lights replaced. Bakewell Road and Firs Parade were not included in this phase as they are just off Crown Square, and along with Imperial Road they are yet to be redeveloped.

Matlock on film and television 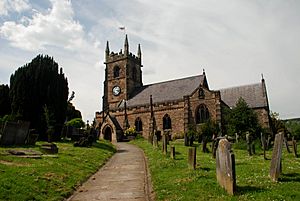 The Youth Hostels Association (YHA) has its national headquarters in the former Severn Trent Water building on Dimple Road, Matlock. YHA has had two hostels in the town. The first (1933–1934) in Tor Dale and the second (1983–2007) in Bank Road. Despite the close proximity of the Head Office, Bank Road closed in 2007 as part of a restructuring exercise. It has subsequently been redeveloped.

All content from Kiddle encyclopedia articles (including the article images and facts) can be freely used under Attribution-ShareAlike license, unless stated otherwise. Cite this article:
Matlock, Derbyshire Facts for Kids. Kiddle Encyclopedia.