Wirksworth is a market town in Derbyshire, England, with a population recorded as 5,038 in the 2011 census.

Wirksworth is listed in the Domesday Book of 1086. Within it is the source of the River Ecclesbourne. The town was granted its market charter by Edward I in 1306. The market is held every Tuesday in the market square. St Mary's Church is believed to date from about AD 653.

Historically, Wirksworth developed as a centre for lead mining and later of stone quarrying.

Many of the institutions in the area have connections with the Gell family, of Hopton Hall, whose most famous member was Sir John Gell, 1st Baronet, who fought on Parliament's side in the Civil War. One of his predecessors, Anthony Gell, founded the local grammar school, and one of his successors, Phillip Gell, opened the curiously named Via Gellia (possibly named in allusion to the Roman Via Appia), a road from the family's lead mines around Wirksworth to the smelter in Cromford. Today, the Anthony Gell School is named after Anthony Gell.

During the Carboniferous period (between about 359 and 299 million years ago), Wirksworth was under tropical oceans, thus giving it vast quantities of limestone for quarrying. There is an extensive history of quarrying, which scars the surrounding of the town, whilst Dene Quarry is still operational in the neighbouring village of Cromford.

Close to Wirksworth in Carsington Pastures is the Dream Cave, where the remains of a woolly rhino were found in the late 19th century.

The area may well have been visited by Homo erectus as long as 150,000 years ago, during warm inter-glacial periods. An Acheulean handaxe from the Lower Paleolithic has been found at Hopton nearby. From other remains found in the county there would seem to have been human presence at least periodically until the Romans arrived and found a thriving lead industry.

Wirksworth is rumoured to be the ancient Roman town of Lutudarum, although there is speculation as to the whereabouts of this. In 2009 a team of volunteers excavated near the vicarage for a Roman fort, but failed to find it. 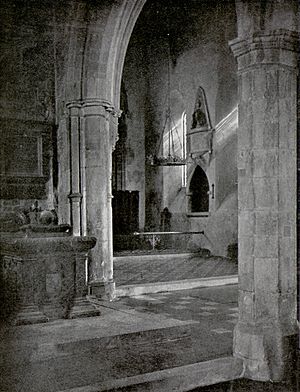 Interior of the church circa 1899

One of the rectors of Wirksworth was Anthony Draycot who served from 1535 until his imprisonment in 1560. Draycott was the judge at the heresy trial of Joan Waste.

The ancient Wirksworth wapentake or hundred was named after the town.

Lead mining was certainly flourishing in Roman times. A possible Roman road led to a ford between Duffield and Milford and thence to the garrison at Derventio (Derby) and to Rykneld Street and possibly but not certainly, to the ports on the Humber. In Anglo-Saxon times there were many mines owned by the abbey of Repton. Three lead mines are identified in the entry for Wirksworth in the Domesday Book.

Every man had the right to dig for ore wherever he chose, except in churchyards, gardens or roadways. All that was necessary to stake a claim was to place one's "stowce" or winch on the site and extract enough ore to pay tribute to the "barmaster." This right remains in theory.

Henry VIII granted a charter to hold a miners' court in the town called the Bar Moot. The present building of that name dates from 1814. Within it is a brass dish for measuring the levy which was due to the Crown. Even into the 20th century, the punishment for stealing from a mine was to have one's hand nailed to the stowce. One then had the choice of tearing oneself loose or starving to death. The Barmote Court is still held today, in the Bar Moot hall, Chapel Lane, Wirksworth, and controls all matters of lead mining.

There is a tiny carving in Wirksworth Church, taken from Bonsall Church during a restoration project and never returned, of a miner with his pick and "kibble" or basket. The carving is known as "th' Owd Man of Bonsall." The ore was washed out by means of a sieve, the iron wire for which had been drawn in Hathersage since the Middle Ages. Smelting was carried out in "boles", hence the name Bolehill. The lead industry, the miner, the ore and the waste, were known collectively as "t'owd man."

By the 18th century there were many thousands of mines, all worked individually. Defoe gives an eye-witness account of a lead miner's family and of the miner himself at work. At this time, the London Lead Company was formed which brought in the finance to dig deeper mines, with drainage channels, called soughs, and bring in Newcomen steam engine pumps.

There was a workhouse in Wirksworth from 1724 to 1829. Called Babington House, it was located on Green Hill and housed 60 inmates.

In 1777, Richard Arkwright leased the land and premises of a corn mill from Philip Gell of Hopton and converted it to spin cotton, using his water frame. Haarlem Mill was the first cotton mill in the world to use a steam engine, which it used to replenish the millpond that drove the mill's waterwheel. This mill was adjacent to another, Speedwell Mill, owned by John Dalley, a local merchant. These mills still stand close together at Miller's Green next to the Derby road.

Haarlem Mill was sublet in 1792, when Arkwright's son, Richard, began to sell off the family's property assets in his move towards banking. It was given that name in 1815, when it was converted to weaving tape, by Madely, Hackett and Riley, who had established Haarlem Tape Works in Derby in 1806. In 1879 the Wheatcroft family, who were producing tape at Speedwell Mill, expanded into Haarlem.

The two mills together employed 230 people, and it was said that their weekly output equalled the circumference of the earth, and that Wirksworth was the primary producer of red tape for Whitehall.

One of D.H. Lawrence's houses (Mountain Cottage), in which he lived with his wife Frieda in 1918–19, stands below the B5023 road on the outskirts of Middleton-by-Wirksworth, approximately 1½ miles northwest of Wirksworth. Lawrence also reputedly spent a lot of time at Woodland Cottage on the opposite side of New Road. While staying in Middleton in the bitter winter of 1918–19, Lawrence wrote the short story "A Wintry Peacock" (published in 1921).

Wirksworth was the prime location of ITV's Sweet Medicine (2003), as well as featuring as an occasional location in its forerunner Peak Practice. More recently, part of Mobile was filmed on a train on the Ecclesbourne Valley Railway, and much of an episode of the BBC series Casualty was filmed here.

Wirksworth features in the 2015 memoir The Long Road Out of Town by author and journalist Greg Watts, who grew up there.

Middle Peak Quarry on the outskirts of Wirksworth featured in the 2010 music video "Unlikely Hero" by the Hoosiers.

Abraham Bennet was curate of Wirksworth in the 18th century and did important early work in electricity, in association with Erasmus Darwin. There is a memorial plaque in Wirksworth Church and a portrait by an unknown artist.

The surgeon and author Frederick Treves was in medical practice in the town in 1877–79. A house in Coldwell Street is named after him.

The oldest living man in Britain, the Rev Thomas Reginald "Reg" Dean, lived at a care home in the town until his death on 5 January 2013. Born at Tunstall, Staffordshire on 4 November 1902, he lived in Derbyshire from 1947 and served as a minister at the United Reformed Churches in Wirksworth and nearby Matlock for some 20 years until his retirement in 1980. He also helped form the Dalesmen Male Voice Choir in the late 1980s and was made its life president.

Wirksworth is currently twinned with Die in Southern France through the Wirkworth Twinning Association. 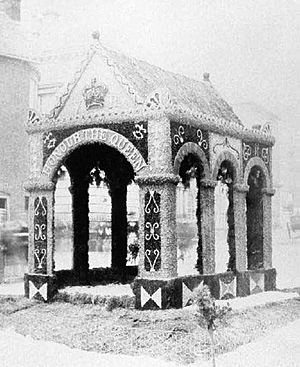 Well or tap dressing in Wirksworth in the 1860s

Districts of Wirksworth include Yokecliffe, Gorsey Bank, Bolehill, Mountford and Miller's Green. Bolehill, although technically a hamlet in its own right in Wirksworth's suburbs, is the oldest and most northern part of the town, while Yokecliffe is a fairly new estate in the western area of the town. Modern houses have recently been built in the Three Trees area and at the bottom of Steeple Grange, this housing estate is called Spring Close.

Fanny Shaw's Playing Field, just out of the centre of town, is the principal recreation area for the north of the town. It houses a new skate park and play area. In the south of the town, there is the "Rec", where there is another children's play area, along with cricket and football pitches. 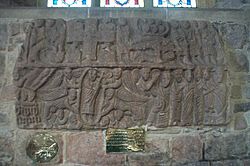 The town is a popular location from which to explore the Derbyshire Peak District and offers a range of accommodation for visitors, some of it in historic buildings, such 18th century Old Manor House on Coldwell Street and the Old Lock-Up guest house, which dates from 1842. The town also has a grand coach house originally built for Sir Richard Arkwright, but now converted into a holiday cottage. Wirksworth Heritage Centre is just off Market Place in Crown Yard. The exhibition shows the history of Wirksworth from its prehistoric Dream Cave and woolly rhinos, through its Roman and lead mining histories, to the modern era. Other nearby attractions include the Ecclesbourne Valley Railway, the Steeple Grange Light Railway and Peak District National Park.

Wirksworth's well dressing was adapted after the arrival of piped water so that not only wells but also taps were decorated. and carnival

Early April - The Wirksworth Book Festival is held over the first two weeks in April, and is a celebration of books and reading, featuring mainly local writers, and showcasing venues across the town.

All content from Kiddle encyclopedia articles (including the article images and facts) can be freely used under Attribution-ShareAlike license, unless stated otherwise. Cite this article:
Wirksworth Facts for Kids. Kiddle Encyclopedia.