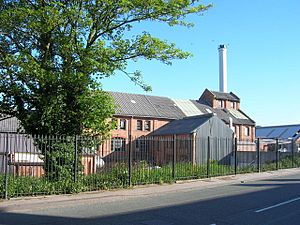 Former Nestle creamery circa 2006, before demolition 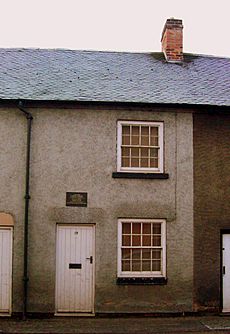 Ashbourne is a market town in the Derbyshire Dales, England. It has a population of 7,112. It contains many historical buildings and many independent shops and is famous for its historic annual Shrovetide football match.

Ashbourne is a market town and was granted a market charter in 1257.

In medieval times Ashbourne was a frequent rest stop for pilgrims walking 'St Non's Way' to the shrine at Dunstable in Bedfordshire.

The forces of Charles Edward Stuart passed through Ashbourne during the Jacobite rising of 1745.

The cobbled market place hosts a traditional outdoor market every Thursday and Saturday throughout the year, complementing the wide range of individual shops in the town. Although its market heritage is important, it came under threat of closure from Derbyshire County Council in November 2012. The people of Ashbourne have opposed any such moves by the council and started an online petition. Ashbourne became the 97th Fairtrade Town in March 2005 after many businesses, cafes, shops and community organisations started supporting Fairtrade.

"In 1881, four gentlemen founded a society, with the aim of improving the standard of Shire horses in the Ashbourne area. Originally known as the Ashbourne Cart Horse Society, later that year, they held their first a show on the Paddock, at Ashbourne. This was so successful, it was determined by public meeting to put the show on a permanent basis and apart from a few years lost to war and foot-and-mouth, an annual show has been held ever since. In 1888, the title Ashbourne Shire Horse Society was adopted and royal patronage was granted in 1899 by King Edward VII, who was President in 1901. Shrovetide Football although much older, did not become royal till 1928. Although there have been ups and downs over the years, the ambition of the founders has been fully justified. It has grown, changed and evolved, with cattle introduced in 1925 and sheep in 1957. Other sections have also been added, so that it has become the modern Ashbourne Show, now presented by the Ashbourne Shire Horse Society. However, what has not changed is the aim and ambition to produce a show for the encouragement of excellence in agriculture and animal husbandry and for the information education and entertainment of the local community and the visitors to the area each August."

Ashbourne has a large number of public houses for such a small town centre: there are currently 10 pubs trading, as well as 2 social clubs. However, the town's most famous establishment, the Green Man & Black's Head Royal Hotel, closed in 2012 and underwent a change of ownership in 2013. Part of it is being redeveloped into retail units and a bistro, and some of the hotel bedrooms are being restored but, as of February 2014, plans are also afoot to restore a pub function to the complex. The famous and rare 'gallows' sign across St John's Street does, however, remains a focal meeting point in the town. Local historians have noted that almost 1 in 4 buildings

The Tissington Trail, a popular recreational walk and cycle path, starts at Mappleton Lane on the northern outskirts of town, accessed by a large Victorian tunnel about 380 yards long running from the former railway station site in the town, and follows the course of the former Ashbourne to Buxton railway, running from what was Ashbourne railway station through the village of Tissington and joining the High Peak Trail (the old Cromford and High Peak Railway) at Parsley Hay.

Construction of the Ashbourne to Buxton line commenced in 1896 and passenger services started to Buxton in August 1899 following the building of a joint railway station to serve both LNWR and NSR lines. The line closed to regular passenger traffic in 1954, and all services on the Ashbourne–Parsley Hay section, including excursion traffic, ceased in 1963. The line continued down the Dove to Rocester near Uttoxeter where it joined the main North Staffordshire Railway. This southern link had previously opened in 1852 and in 1867 LNWR gained power to run over the line. It also closed to passengers in 1954, finishing completely in the early 1960s. 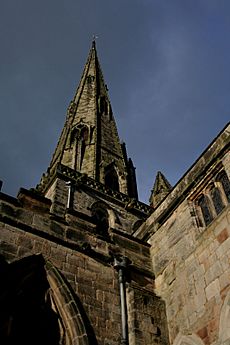 The Limestone Way does not enter the town but passes around it some 2 to 3 miles away, going through Tissington, Thorpe, Marten Hill and above Mayfield on its way to Rocester. Although there is no formal link to the Limestone Way from Ashbourne, there are a number of routes that walkers from the town could use to join up with the way.

The 215 ft (66 m) spire of St Oswald's Church dominates the town. The church is Early English in style and was built around 1220. There are a few remnants of earlier Norman construction and in the south aisle is part of a Saxon cross shaft. The church of St John was built on Buxton Road in 1871 in a neo-Norman style. Ashbourne Churches Together (ACT) has a link with the Diocese of Patna in the ecumenical Church of North India. Regular visits take place in both directions and members of ACT are currently sponsoring the education of children in a school in Bihar, one of the poorest states in India.

All content from Kiddle encyclopedia articles (including the article images and facts) can be freely used under Attribution-ShareAlike license, unless stated otherwise. Cite this article:
Ashbourne, Derbyshire Facts for Kids. Kiddle Encyclopedia.