Uttoxeter lies west of the River Dove in East Staffordshire, near the cities of Stoke-on-Trent, Derby and Lichfield. 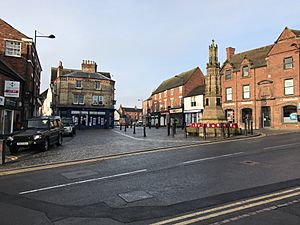 Uttoxeter's name has had at least 79 spellings since it was mentioned in the Domesday Book as "Wotocheshede": it probably came from Anglo-Saxon Wuttuceshǣddre = "Wuttuc's homestead on the heath". Some historians point to pre-Roman settlement here and Bronze Age axes have been discovered in the town (now in display in the Potteries Museum in Stoke-on-Trent). It is possible that Uttoxeter had some form of Roman activity due to its strategic position on the River Dove and closeness to the large garrison forts at Rocester between 69 and 400 AD, and the recently discovered fort at Stramshall, though little corroborating archaeology has been found.

Perhaps the most famous event to have occurred in Uttoxeter is the penance of Samuel Johnson. Johnson's father ran a bookstall on Uttoxeter market, and young Samuel once refused to help out on the stall. When Johnson was older, he stood in the rain (without a hat) as a penance for his failure to assist his father. This event is commemorated with the Johnson Memorial, which stands in the Market Place, in the town centre and there is also an area of town called Johnson Road, which commemorates him.

Mary Howitt, the Quaker writer of the poem "The Spider and the Fly", lived in Uttoxeter for a long period of her life. The town influenced some of her poems and novels, as well as fuelling her love of natural history, which also featured in her books. Howitt Crescent, a residential road in the town, was named after her. The house where she lived is still standing in Balance Street.

Thomas Fradgley, Uttoxeter's own architect designed the Town Hall (1854); the Johnson Memorial (1854); St. Michael's Church, Stramshall; St.Lawrence Church, Bramshall (1835), St. Mary's Church, Uttoxeter; Marchington Church. He was involved with Pugin and other architects in designs for the 16th Earl of Shrewsbury at Alton Towers including the figures of the Talbot Hounds at the entrance tower, 1830; the Angel Corbels in the Lady chapel, 1833; Alton Towers Chapel with Joseph Potter and completed in 1833; Swiss Cottage or Harper's Cottage, Farley. He was the architect in the improvement of several local schools, including Uttoxeter National School, Hanbury Free School, enlarged in 1848; Oakamoor N.S., Cauldon Low N.S., Alton N.S., and Draycott in Hanbury School. It is believed he designed Moorlands, Byrds Lane, Uttoxeter for one of the Bamfords. He married Clara Warner from Bramshall. Their only child Thomas died aged 6. Thomas Fradgley died in 1883 aged 83.

Bunting’s brewery occupied a large area of the centre of the town since the Victorian era. It stopped producing beer in the 1930s after being bought by Parkers Brewery in Burslem, later part of Ind Coope. The last remains of the brewery were demolished in the 1960s to make way for the Maltings shopping precinct and car park. The brewery clock was re-furbished and installed on the town hall in the 2000s.

In 1945, Joseph Cyril Bamford founded J C Bamford Excavators Limited in Uttoxeter, now known as JCB. The firm, based in the nearby village of Rocester, is the world's third-largest construction equipment manufacturer. The firm's first vehicle was a tipping trailer made from war-surplus materials, which J. C. Bamford built in a rented lock-up garage in Uttoxeter. The Bamford family had previously started Bamfords, later Bamford International Farm Machinery which was a large employer in the town from the end of the 19th century through to the early 1980s when it gradually went into decline before closing in 1986.

Uttoxeter celebrated its 700-year anniversary of the awarding of a Market charter (1308) in 2008, which underpins the market provision on Saturdays and Wednesdays in particular, and other festival markets. The 1308 charter followed a more general Royal Charter granted to the town's burgesses in 1252. The originals reside at the National Archives in Kew and the Deferrers Museum in Leicester.

According to the 2011 census the population for Uttoxeter Civil Parish was 13,089. White British makes up by far the largest ethnicity at 96% of the population with just 493 people from an ethnic minority.

The bus stop next to the station runs an hourly service to Cheadle, Stoke-on-Trent and Alton Towers. Buses to Stafford run every 2 hours; buses to Burton upon Trent run every hour.

At one time it was also the terminus of a branch of the Caldon Canal (aka the Uttoxeter Canal), but most signs of this, apart from an area of Uttoxeter called "The Wharf", have now disappeared—largely because much of the bed of the canal was used in the 19th century as the route of the North Staffordshire Railway main line from Uttoxeter to Macclesfield (which has now also disappeared).

The nearest airport from the town is East Midlands, which is around 29 miles away.

Policing in Uttoxeter is provided by Staffordshire Police, from the police station on Balance Street. HM Prison Dovegate, in the nearby village of Marchington, is a Category B men's private prison operated by the Serco. HM Prison Sudbury is located just over 6 miles away and over the Derbyshire boundary, and is operated by HM Prison Service. It is a Category D men's open prison.

Statutory emergency fire and rescue service is provided by the Staffordshire Fire and Rescue Service. Uttoxeter Fire Station is on Cheadle Road to the north of the town.

There is no hospital in Uttoxeter, but the surrounding Queen's Hospital in Burton, County Hospital in Stafford, the University Hospital of North Staffordshire in Stoke-on-Trent and Royal Derby Hospital all serve the town. There is no ambulance station but a team of Rapid Response Paramedics are based in the town and supported by volunteer Community first responders. 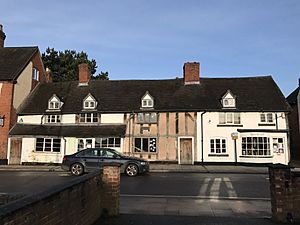 St. Mary's Catholic Church in Balance Street was Augustus Welby Northmore Pugin's first church design. He later worked on Alton Towers and the Houses of Parliament. Three miles north west of Uttoxeter are the remains of Croxden Abbey, founded in 1176 by Bertram de Verdun for monks of the Cistercian Order. Redfern's Cottage:Museum of Uttoxeter Life is on Carter Street and is run by a group of volunteers. The restored timber-framed building houses local history displays and a small gift-shop selling local history books and souvenirs, with a cafe opening in 2017.

The town's refurbished Market Place contains the town's main war memorial, as well as the Millennium Monument and the Dr. Johnson Memorial. The Wednesday Friday and Saturday Markets are held weekly in the Market Place, in addition there is a monthly Makers' Market.

Smallwood Manor, just over a mile outside the town and built in 1886, was formerly a country house and is now home to Smallwood Manor Preparatory School. The National Trust's Museum of Childhood is located at nearby Sudbury Hall.

Uttoxeter Racecourse is one of Uttoxeter's most famous landmarks and is a short walk from the town centre. 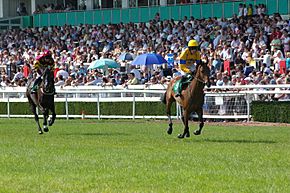 The Alton Towers Resort is around 10 miles (16 km) from Uttoxeter. The Peak District National Park is about 20 miles away.

Croxden Abbey is a ruined Cistercian Abbey approximately three miles outside of the town.

The Uttoxeter Casket or Dr Nelson's Casket is an Anglo Saxon reliquary which likely came from Croxden Abbey. It was rediscovered in a cottage in Croxden in the mid 19th century. It probably held a religious relic and was displayed on an altar. The casket currently resides in the Museum of Contemporary Art Cleveland, Ohio.

The Wednesday Friday and Saturday Markets are held weekly in the town's refurbished Market Place. A monthly Makers Market is held in the High Street.

Uttoxeter Civic Society was re-established in 2004 to act as a civic watchdog and to protect and promote the history and heritage of Uttoxeter.

Each year, Uttoxeter Lions run a beer festival in June, 'Lark in the Park' at Bramshall Road Park on August bank holiday, Bonfire and Fireworks Night in November and an annual Christmas fair and market known as 'Cracker Night'.

Uttoxeter Choral Society was founded in 1881 and is one of the oldest choral societies in the United Kingdom. They have a continuous record of making music which is matched by very few other societies.

Uttoxeter is also the home of the Acoustic Festival of Britain. [1]

Uttoxeter obtained minor fame as the setting of a recurring comedy sketch by comedians Stephen Fry and Hugh Laurie in their BBC television series A Bit of Fry and Laurie. In one episode of the sketch, two obnoxious business entrepreneurs (who run various companies in Uttoxeter throughout the series) develop grand plans for a popular sports centre. The sketch derives its humour from the fact that Uttoxeter is in fact a very quiet and sedate town. The name can also be said with mild humorous effect.

Oldfields Hall Middle School was featured in the film A Room for Romeo Brass, written and directed by Shane Meadows and Paul Fraser, two Uxonians who have risen to fame.

The town also featured in a critically praised short story entitled "The Long, Long Road to Uttoxeter" by journalist and TV presenter Rod Liddle in his book Too Beautiful for You.

Uttoxeter Racecourse has been used on several occasions as the racecourse visited by residents of the popular soap Coronation Street.

Uttoxeter is the home of Rockin' Johnny Austin MBE, recognised for his charity work and for rock and roll songs such as Rockabilly Stroll which was a minor hit in the 1980s. John also produced a World Cup Single, Victory Day, in 2010 which was filmed on location in Uttoxeter Market Place. 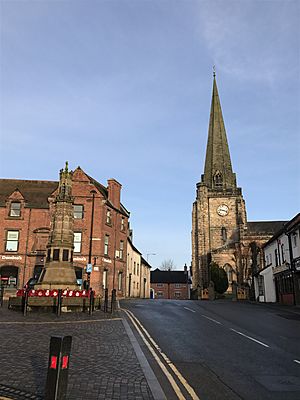 The main religious building in Uttoxeter is the Church of England church St. Mary the Virgin Church on Church Street in the town. The present structure dates from 1877 but parts of the building date from the 15th century. There is also another Church of England church in The Heath area of the town which is known locally as The Heath Church. Both churches lie in the parish of Uttoxeter and the Diocese of Lichfield.

Uttoxeter also has a Methodist church which dates from 1812, a United Reformed church on Carter Street, a Pentecostal Church, a Free Church, and a Kingdom Hall for Jehovah's Witnesses.

The are no other religious sites in Uttoxeter. The nearest mosques and Sikh Gurdwara are in Burton upon Trent, and the nearest synagogue is in Newcastle-under-Lyme.

The Uttoxeter Meeting House in Carter Street was built in 1706, remaining in use until the late 1880s when dwindling numbers of attendees resulted in its closure, however it was reopened in 1922, remaining so ever since.

All content from Kiddle encyclopedia articles (including the article images and facts) can be freely used under Attribution-ShareAlike license, unless stated otherwise. Cite this article:
Uttoxeter Facts for Kids. Kiddle Encyclopedia.