Kids Encyclopedia Facts
Not to be confused with Cheadle, Greater Manchester.

Cheadle is a market town and civil parish in the Staffordshire Moorlands District of Staffordshire, England, with a population of 12,165 at the 2011 census. It is located between Uttoxeter, Leek, Ashbourne and Stoke-on-Trent.

Cheadle is an historic market town dating back to Anglo-Saxon times, being referred to in the Domesday Book. It was (and still is, but not for administrative purposes) in the historic Staffordshire Hundred of Totmonslow; nowadays it is part of the Staffordshire Moorlands area.

Cheadle appears in the Domesday Book as "Celle" held by the lord of the manor, Robert of Stafford, at the time the area covered 6 miles by 3 miles and listed 9 families. In 1176 the Basset family acquired the manor of "Chedle" and in 1250 Ralph Basset was granted a market charter and annual fair by King Henry III.

In 1309, 75 families are recorded as using a corn-grinding mill sited near Mill Road. Fifty years later, a new church was built in the village replacing a 12th-century structure and this church remained in use until 1837.

In 1606 a school was founded by the church, and in 1685 the then curate of the parish, Rev, Henry Stubbs, left an endowment to found a grammar school in Cheadle. The school was built at Monkhouse (behind the High Street) and was active until 1917. The endowment continues to this day. The Monkhouse is currently home to 3rd Cheadle Scout Group.

By 1676 Cheadle’s population is recorded as just over one thousand, and a hundred years later (1772) as one thousand eight hundred. At this time the main source of employment was agriculture and farming. During the same period a new workhouse was built and opened. It was extended under the Cheadle Union an 1837. Part of the original building was demolished in 1909, renamed an infirmary. The whole complex was demolished in 1987 and a new hospital was built on the site, which was opened in 1989 by the Princess Royal.

In 1798, 10 weavers houses were built. The weavers lived downstairs and the looms for the manufacture of tape were upstairs. By the 1820s the looms were transferred into a factory in Tape Street. This tape factory closed in 1972, and is now a shop. In 1851 silk and narrow fabric mills were built in Cheadle. They employed hundreds of operatives, and closed in 1981.

In the Brookhouses area of Cheadle in 1725, the Cheadle Brass and Copper Company started production, transferring to the Oakamoor area 100 years later under the company name Thomas Patten. It was bought in 1851 by Thomas Bolton of Birmingham. In 1890 Bolton’s opened a factory at Froghall and the Oakamoor works were eventually closed in 1963.

St Giles' Catholic Church opened in 1846. Its 200 feet (61 m) spire still dominates the town today. It was built by Augustus Welby Northmore Pugin, who was commissioned by John Talbot, 16th Earl of Shrewsbury to create a church that "would have no rival". To achieve his aim, Talbot gave Pugin unlimited resources with which to build it. The church is more commonly known as 'Pugin's Gem', and is the centre of a local tourist event known as 'Discover the Secret'.

At the turn of the 20th century the first open air swimming baths were constructed at Brookhouses, and telephone installation began in 1904. In 1901 Cheadle was linked to the railway network by the Cheadle Railway, operated and later owned by the North Staffordshire Railway, with the building of a railway station at Majors Barn, giving access to further industries and movement of passengers. At a later period sand, gravel and aggregates used for building purposes were transported from the station as well as coal.

The first motor car arrived in Cheadle in 1903, and the first licensed omnibus service – Cheadle to Longton – commenced in January 1914.

One of the British Signals Intelligence Y-stations called RAF Cheadle was situated at Woodhead Hall, from land purchased by the Air Ministry playing a vital role in helping intercept German Luftwaffe radio communications during WWII. 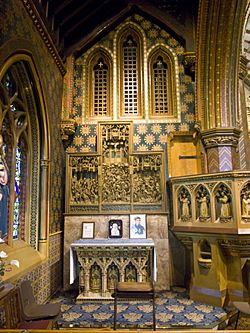 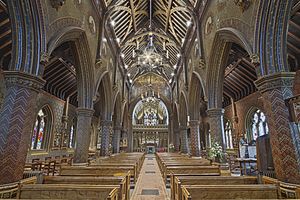 The 200 feet (61 m) spire of St. Giles' Catholic Church dominates Cheadle's skyline. Known as "Pugin's Gem, it is considered to be the most complete expression of Pugin's beliefs about what a church ought to be, with everything in it having a practical and symbolic purpose. The church featured heavily in local events celebrating the 200th anniversary of the birth of Pugin.

The town also has an Anglican church dedicated to St Giles. It was totally rebuilt in 1837-9 to the design of J. P. Pritchett but incorporating fragments and furniture from the earlier church. There is also a strong Methodist tradition in Cheadle, and in the 19th century it was the various Methodist chapels around the Cheadle area which taught many of the young boys who worked on the farms or in the coal mines to read and write. There is a large modern Methodist Church in the town.

To the south of Cheadle are the remains of Croxden Abbey, founded in 1176 by Bertram de Verdun for monks of the Cistercian Order. The Abbey is a 5-mile walk from the town centre. 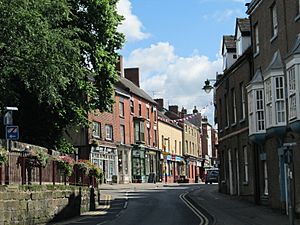 The south-west end of High Street, near the parish church.

Cheadle is a base for exploring the Peak District National Park area, which is popular with walkers and rock climbers. Surrounded by lofty hills, Cheadle is the gateway to the wooded Churnet Valley and the Staffordshire Moorlands. It is also around 1 mile (1.6 km) from the Alton Towers Resort.

Cecilly Brook Local Nature Reserve is in the centre of town. It is one of the most important breeding sites for water voles in Staffordshire. There are 42 acres of landscaped lakes at the JCB factory. Local leisure facilities are at Cheadle Recreation Ground and South Moorlands Leisure Centre.

The High Street of Cheadle has many old buildings and is little changed from how it looked in the Victorian era.

The Cheadle Discovery and Visitor Centre located within Lulworth House, is the town's heritage centre. It is managed by the Cheadle Discovery Group and has a permanent display relating to Pugin and regular rolling displays about local history. It also acts as a voluntary tourist information point.

Cheadle used to be served by a branch line opened in 1901 from Cresswell which was a station on the North Staffordshire Railway Crewe to Derby Line. It took almost thirty years of petitioning by the local coalmasters and notables in the town for the Cheadle Railway Company to build the small branch line and station. Even though the branch was only about four miles (6 km) long it was difficult to build as a tunnel had to be constructed under the huge Bunter Sandstone Hill at Huntley. The tunnel was very wet and plagued by problems with its roof. In the 1930s the LMS Railway, which had taken over the North Staffordshire Railway, built a diversion line around Huntley tunnel and abandoned it. The tunnel survives because it was used as a coal mine in the '70s and '80s, and the southern portal remains; however the northern portal has long been filled in. With the opening of the branch line to Cheadle it meant that New Haden Colliery and Parkhall Colliery now had connections to the rail network, and Cheadle in general had its long-awaited rail connection to the outside world. The line closed to passenger traffic in 1963 but remained open to serve local gravel quarries until 1982.

Today, the nearest railway station is Blythe Bridge on the Crewe-Derby Line.

Bus services to Cheadle were provided by PMT until it was bought out by First Group. Apart from school service 32S, First Potteries now only operate hourly service KF to Hanley. D&G Bus operate service 32X which also serves Hanley every hour and service E1 to Alton Towers. Town service 123 is operated by Bennetts while service 30 to Leek is operated by Aimee's. 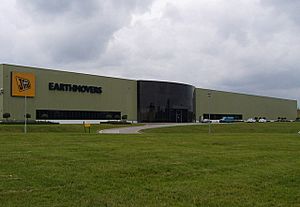 Cheadle is mentioned in Domesday Book as a small and unimportant hamlet with a small population. The town grew steadily over the next few hundred years, with the development of industry and agriculture. The historic industries that the town has depended on have been coal mining, silk, agriculture, brass making and the historic copper industry in nearby Froghall and Oakamoor. The town and the nearby village of Tean also had a textiles industry in tape weaving: the mill has since been converted into flats.

For hundreds of years the main industry in the Cheadle area was coal mining. The Cheadle Coalfield was part of the much larger North Staffordshire Coalfield. The town and the surrounding area were once home to over sixty mines, but the Industry declined in the 20th century, and one by one the remaining larger pits were closed; Parkhall (now the home to the JCB factories) and Hazlewall in the 1930s, New Haden in 1943 and Foxfield in 1965. However opencast mining and small scale adit mining carried on in Cheadle up until the 1990s.

Today the town's main employer is the large JCB factories. There are also several small industrial units on the site of the former New Haden Colliery and the local Alton Towers Resort employs many of its work force from the Cheadle area. A lot of people in the town commute to Stoke-on-Trent, Newcastle-under-Lyme, Uttoxeter and Derby.

Markets are held in the market place on Tuesdays, Fridays and Saturdays. 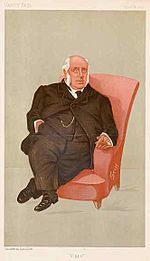 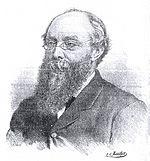 All content from Kiddle encyclopedia articles (including the article images and facts) can be freely used under Attribution-ShareAlike license, unless stated otherwise. Cite this article:
Cheadle, Staffordshire Facts for Kids. Kiddle Encyclopedia.