Kids Encyclopedia Facts
Not to be confused with Cheadle Heath; Cheadle Hulme; or Cheadle, Staffordshire.

Cheadle is a town in the Metropolitan Borough of Stockport, Greater Manchester, England. Within the boundaries of the historic county of Cheshire, it borders Cheadle Hulme, Gatley, Heald Green and Cheadle Heath in Stockport, and East Didsbury in Manchester. In 2011[update], it had a population of 14,698.

There has been human occupation in the area that is now Cheadle since prehistoric times. The earliest evidence of civilisation is of burial mounds dating from the iron age, belonging to Celts who occupied Britain. Later, the area was occupied by Brigantes, whose activity was discovered in the form of axe fragments.

In the first millennium, Romans occupied the area, and their coins have been discovered. During the 7th century St. Chad preached in the area, and a stone cross dedicated to him was found close to the confluence of the River Mersey and Micker Brook in 1873. This area became known as Chedle, a corruption of Chad' Hill.

The village is first recorded in the Domesday Book under the name "Cedde", which comes from the Celtic word for "wood". It was held by Gamel, a free Saxon under Hugh d'Avranches, 1st Earl of Chester; it was about three miles long and half as wide, containing both wooded and open land, with areas enclosed for hunting purposes. This early manor occupied the approximate areas of both modern day Cheadle and Cheadle Hulme.

By June 1294, Geoffrey de Chedle was lord of the manor, and it was valued at about £20 per annum. Geoffrey's descendant Robert (or Roger) died in the early 1320s, leaving the estate to his wife Matilda who held it until her death in 1326. As there were no male heirs the manor, which was now worth £30 per annum, was divided between her daughters, Clemence and Agnes. Agnes inherited the northern half (which would later become the modern-day Cheadle), and Clemence inherited the southern half (latterly Cheadle Hulme). The two areas became known as "Chedle Bulkeley" and "Chedle Holme" respectively.

William de Bulkeley succeeded his mother, and was a participant in several wars in France for Edward, the Black Prince. His son, Richard, was sent to live at the court Richard II, and later to a baron whose daughter Margery married Richard. Richard died at the age of 21, but Margery lived until she was around 90 years old. She was succeeded by her grandson and great-grandson, both named William. Shortly after the Battle of Bosworth, the latter William was succeeded by his brother Richard.

During the reign of Henry VIII, the current St Mary's Church on High Street was built. There has been a church on the site since the 12th century, the original being constructed of wood, but it was rebuilt in stone between 1520 and 1550. The church contains an effigy of John Stanley who, along with many other men from the area, fought in the Battle of Flodden. Later he claimed the manor for himself, but was imprisoned by Thomas Wolsey who ensured the land went to its rightful owner.

The Bulkeleys continued to hold the lands as lords of the manor until the 18th century, when the manor was purchased by Thomas Egerton.

During the uprising of Bonnie Prince Charlie (the "Young Pretender"), his troops marched through Cheadle. Some remains have been found, including swords. 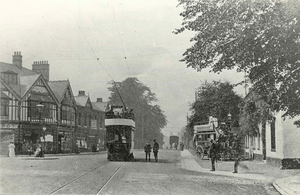 Moseley Old Hall, an early Stuart mansion dating from 1666 is still standing and is owned privately. It is situated at the end of a blocked-off public road, making hard to find and therefore quite unheard of.

Abney Hall is a late Victorian hall from 1847 and is the old Cheadle town hall, though is now used for offices. It is surrounded by parkland which is open to the public all year round and features some of the only wetlands left in Stockport.

Cheadle grew rapidly during the Industrial Revolution when it was used as a stopping point for travellers and merchants on their way to central Manchester.

Cheadle is a suburban village in the Metropolitan Borough of Stockport, Greater Manchester. Cheadle is situated 3 miles (4.8 km) from Stockport town centre and 8 miles (13 km) from Manchester Town Hall.It is close to Manchester Airport. Cheadle lies on the Cheshire Plain in the final meander of the Ladybrook, (Micklebrook) before its abfluence into the River Mersey to the north. Cheadle is on the A560 road from Stockport to Chester and borders onto the A34 Manchester to Birmingham road. Its geology is boulder clay and gravels: the parkland of Abney Hall to the north is on the flood plain of the Mersey.

Cheadle's public transport is now confined to buses operated by several firms. However, from 1866 until 1964, the locality was served by a Cheshire Lines Committee railway station (initially called Cheadle, and from 1950 Cheadle North) situated 600 yards (550 m) north of the village on the west side of Manchester Road and from 1866 until 1917 by Cheadle LNWR a London & North Western Railway station located next to the railway overbridge near the centre of the village. Both stations were on lines leading from Altrincham to Stockport.

Cheadle no longer has its own railway station, though there are stations in several neighbouring vicinities. Gatley railway station is approximately one mile west of Cheadle village, and the neighbouring areas of East Didsbury (within the City of Manchester's boundaries), Cheadle Hulme and Heald Green all have stations themselves.

Cheadle is accessed by junctions 2 and 3 of the M60 Manchester orbital motorway. It is approximately 4 miles from Manchester Airport.

Cheadle is home to the HQ of sportswear giants Umbro.

It formerly had the head office of Nord Anglia Education. At a later time the Nord Anglia Cheadle housed the International Schools and Learning Services divisions.

The following educational establishments are in Cheadle:

All content from Kiddle encyclopedia articles (including the article images and facts) can be freely used under Attribution-ShareAlike license, unless stated otherwise. Cite this article:
Cheadle, Greater Manchester Facts for Kids. Kiddle Encyclopedia.