Historically in Cheshire, in 1931 Wythenshawe was transferred to the City of Manchester, which had begun building a massive housing estate there in the 1920s. With an area of approximately 11 square miles (28 km2), at one time Wythenshawe was the largest council housing estate in Europe, although private home ownership in the area has grown.

The district comprises nine areas: Baguley, Benchill, Peel Hall, Newall Green, Woodhouse Park, Moss Nook, Northern Moor, Northenden, and Sharston. The boundaries of these areas have changed throughout the district's history, and previously known areas such as Brownley Green and Crossacres have since been assimilated into one of the areas listed, though many residents still refer to them by name. 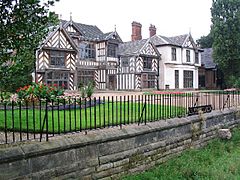 The name of Wythenshawe seems to come from the Old English wiðign = "withy tree" and sceaga = "wood" (compare dialectal word shaw). The three ancient townships of Northenden, Baguley, and Northen Etchells formally became the present-day Wythenshawe when they were merged with Manchester in 1931. Until then, the name had referred only to Wythenshawe Hall and its grounds.

For many centuries the Tatton family owned Wythenshawe Hall and much land in what is now Wythenshawe. Manchester Corporation, which was in desperate need of land to house the city's rapidly increasing population, pressured Mr Tatton to part with the land in 1926. What was once farmland was transformed into one of the largest housing estates in Europe. Due to spending cuts the hall was temporarily closed to the public in 2010. One proposition was that Manchester City Council could sell the building to the National Trust. A Friends Group was formed to support monthly open days and events at the hall. In March 2016 the roof of the hall and an upper floor were severely damaged by a fire, in an arson attack, with the clock tower also damaged.

Immediately south of Wythenshawe is Manchester Airport, formerly called Ringway Airport. Before the Ringway Airport was laid out, three farm fields between Rackhouse Road and Wythenshawe Road in what is now the north edge of Wythenshawe were used as Manchester (Wythenshawe) Aerodrome. This was the UK's first municipal airfield, and operated between April 1929 and early 1930. A barn was converted to act as the hangar and a farmhouse as the administration building. Temporary fuel pumps were installed. The last recorded flight from Wythenshawe Airport took place on 19 June 1930. 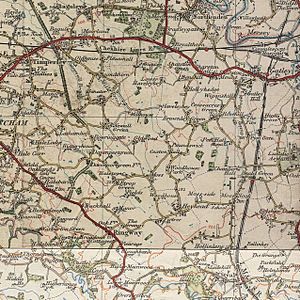 Area where Manchester Airport and Wythenshawe are now, as around 1925

Wythenshawe is Manchester's largest district, a massive housing estate that was started in the 1920s intended as a "garden city" where people could be rehoused away from industrial Manchester.

Part of Benchill (not the area southwest of Gladeside Road) and some areas in the north were built before World War II and called the Wythenshawe Ward of the City of Manchester. The rest was built after the Second World War, starting in the late 1940s as wartime building restrictions were relaxed. Parts of Baguley were still semi-rural in the 1960s, but now there is very little open country left.

The estate was built initially without many shops, amenities or services, and there was very little employment directly to hand. Although Northenden already had a shopping area on Palatine Road, the earliest new shops were built in the 1930s and included parades on Hollyhedge Road, and on Altrincham Road in Sharston (the latter was demolished in 1973 to make way for the M56 Sharston bypass). However, it took decades for some areas of Wythenshawe to get their own neighbourhood shops, which meant residents had to either travel or wait until a mobile shop van visited their area. Various residents' associations were set up to address these problems, but progress was very slow. After the Second World War, Wythenshawe eventually expanded, with several further shops being built (such as Haveley Circle, built in the early 1950s but demolished in the 1990s) and businesses were attracted to the area with the expansion of the Sharston Industrial Estate and, later, the Moss Nook and Roundthorn industrial complexes. Wythenshawe gradually acquired all the amenities and facilities that the original planners had neglected to include with the building of several new schools, shops, pubs and churches. The area also got its own hospital, and Wythenshawe Hospital grew out of the earlier Baguley Hospital after the Second World War in 1948. The largest shopping area was built in the 1960s in the town centre, known as the Wythenshawe Civic Centre, which has been expanded further since it was first built. In 1971, the Wythenshawe Forum was opened there, which included a library, a swimming pool, a restaurant, a bar, and a theatre.

From the 1990s to the 2000s, the houses that were built and owned by the council were transferred to the control of local housing associations, such as Willow Park in east Wythenshawe and Parkway Green in west Wythenshawe. These two associations merged in 2013 to form the Wythenshawe Community Housing Group which is now responsible for around 14,000 homes in Wythenshawe.

In 2007 The New York Times described the housing estates in Wythenshawe as representing an "extreme pocket of social deprivation and alienation."

Most of the farm buildings in the Wythenshawe area were demolished when the estate was built. Some of them (e.g. Hollyhedge Farm, Floats Hall) were left among the houses but suffered from vandalism and had to be demolished later. Some of the present housing estates were named after former farms.

Peel Hall Farm (which had a moat) survived for over 20 years as its occupant lived on the proceeds of selling his land, but soon after he left, the property was vandalised and had to be demolished.

Newall Green Farm survived on the edge of the Newall Green housing estate area, and was still occupied and run as a farm until the early 21st century when its last occupant died, after which it was abandoned and fenced off. The buildings are listed. In 2006 a firm bought Newall Green Farm's buildings from Manchester Corporation. On 21 June 2014 vandals set fire to Newall Green Farm, and its roof was destroyed; though there are plans to turn the buildings into a care home for adults with learning disabilities, and a working farm and a horse-riding centre.

Newall Green Primary School is the only school in Europe which is built inside the park.

Wythenshawe has 12 parks and 18 woodland areas including Wythenshawe Park, which was designated a Local Nature Reserve in 2011. It covers over 270 acres (110 ha) of green space and is home to Manchester's only community farm, Wythenshawe community farm. At the centre of the park is the historic Wythenshawe Hall with its Civil War and Tatton heritage. The park also has riding stables, a horticulture centre, children's play area, athletics track, football pitches, tennis courts, bowls and golfing facilities.

Other parks include Hollyhedge Park, Peel Hall Park, Painswick Park and Baguley Park. Northenden's Riverside Park is the first new park to be established in the city in the 21st century.

Wythenshawe is 8 miles (13 km) south of the city centre and is the southernmost district of Manchester. It is surrounded by some of the most affluent areas in the UK. Altrincham and Hale lie to the south-west, Sale to the north-west and Cheadle to the east. Manchester Airport, the third largest in the UK, is immediately to the south.

Shadow Moss is an area south of Ringway Road in the southeast corner of Wythenshawe. On this old map of Wythenshawe it is roughly the rectangular area between three country lanes with Heyhead at its northwest corner. On modern maps, its north edge is the southern branch of Ringway Road. It was partly in Northen Etchells township and partly in Styal parish. For many centuries it was a peat bog which was dug for peat fuel, locally called "turf"; local manorial law said that after digging peat the top living plant layer had to be lodged back to let more peat form afterwards. Each man's allocated part of the Moss was called his "moss room".

In the 19th century, manorial control was lost over what people used their moss rooms for, and an 1839 tithe map of Northen Etchells shows Northen Etchells's part of Shadow Moss as about 2/3 arable, about 1/3 meadow, one field as pasture, and one field as "uncultivated moors".

Later, the fertile lowland peat soil led to the area being much used for market gardening, with large areas under greenhouses. Of the people who worked there, many lived in Heyhead.

As of around 1970, Heyhead was a small settlement at the south end of Woodhouse Lane and the nearby part of Ringway Road. It comprised several terrace houses, a small shop, two or more old cottages, a chapel, and the Ringway Haulage Company. Manchester Airport's ground level car parking has been displaced from other areas and car parks have been formed to the north and south of the runways and under the approach path. The Heyhead area has been progressively replaced by level car parks, and by 2011 all of Heyhead's buildings had vanished (see History of Manchester Airport#Expansion).

Some greenhouses remain at the far east of the Shadow Moss area as of June 2012, but are used by private car parking operators (not associated with the airport company) and not for growing any crop. The last market gardener there, who grew tomatoes, closed his business in 2011 due to competition from highly mechanized enormous greenhouse establishments elsewhere.

The M56 motorway, constructed in the 1970s as a continuation of the A5103 road (Princess Parkway), bisects east and west Wythenshawe. A bypass connecting it to the nearby M60 motorway was built through Sharston and opened in 1974.

The nearest railway station to Wythenshawe was located adjacent to Longley Lane at the edge of Sharston on the Cheshire Lines Railway from Stockport to Liverpool. Named Northenden for Wythenshawe, Northenden railway station was closed on 30 November 1964. Wythenshawe did not then have a public railway service for several decades, with the nearest stations being located in the neighbouring areas of Gatley, Heald Green and Altrincham. A station at Manchester Airport was opened in 1993.

The Airport Line branch of the Manchester Metrolink tram service includes twelve stops throughout Wythenshawe. The line opened on 3 November 2014, a year ahead of schedule. In addition to the building of the new Metrolink lines and stations, a new public transport hub was built in Wythenshawe Town Centre which opened in June 2015 and includes a new bus station and tram stop.

Wythenshawe is the outdoor filming location for the Channel 4 series Shameless, which shows various shots of the local tower-blocks, housing estates and other architecture unique to this area. Wythenshawe also housed the outdoor sets for the show, which were built on private property. Production moved from West Gorton (in East Manchester) in early 2007, following disruption to filming caused by local youths.

In 2009, Sarah Ferguson, Duchess of York (former wife of Prince Andrew) went to Wythenshawe to make a television documentary for ITV1 entitled The Duchess On The Estate. In it, she visited the Northern Moor area of Wythenshawe to meet locals and discuss their way of life, and to open a new local community centre. Both before and after its transmission, the documentary was widely criticised for being a self-serving publicity stunt by Ferguson, and she was also criticised for her patronising attitude towards the local people.

All content from Kiddle encyclopedia articles (including the article images and facts) can be freely used under Attribution-ShareAlike license, unless stated otherwise. Cite this article:
Wythenshawe Facts for Kids. Kiddle Encyclopedia.