Aberdeen Football Club (also known as The Dons, The Reds and The Dandies) is a Scottish professional football club based in Aberdeen. They compete in the Scottish Premier League and are one of the most successful teams in their country, having won four league titles and seven Scottish Cups. They are also the only Scottish team to have won two European trophies, both in the same year.

Formed in 1903 as a result of the amalgamation of three clubs from Aberdeen, they rarely challenged for honours until the 1950s, when they won each of the major Scottish trophies under manager Dave Halliday. This level of success was surpassed in the 1980s, when, under the management of Alex Ferguson, they won three league titles, four Scottish Cups and a Scottish League Cup, alongside the European honours. Aberdeen were the last club outside of the Old Firm to win a league title, in 1984–85.

Aberdeen have played at Pittodrie Stadium since their inception. The ground currently has a capacity of 22,199 and was the first all-seated and all-covered stadium in the United Kingdom. Pittodrie was also the first football stadium to feature a dugout, an invention of player and coach Donald Colman. The club's colours have been primarily red and white since 1939; before this, they played in black and gold vertical stripes.

Aberdeen attract support from the city and surrounding areas, as they are the only senior team within a wide area. Aberdeen have no geographically close rivals; their nearest neighbours at the same level are in the city of Dundee, with Dundee United having been their principal rivals in the New Firm in the 1980s. Rangers supplanted Dundee United as rivals in the late 1980s, but the rivalry, while fierce, does not approach that of the Old Firm.

For the 1904–05 season, Aberdeen adopted a black and gold striped shirt, which led to the team being nicknamed "Wasps". This strip, with only minor variations, was worn until just before the start of the Second World War. The blue shorts lasted until 1911, and then were replaced with white ones. Socks were black with gold trim, either as stripes or as a solid bar at the turndown.

In March 1939, Aberdeen changed the black and gold colours to red and white, reflecting the silver and red colours of the official City of Aberdeen arms. The first red strips were worn with white shorts, these were worn with either red or white socks from 1939 until the 1965–66 season. In 1966, Aberdeen adopted red shorts, making the official kit all-red, similar to that of Liverpool, who made a similar change at around the same time. This arrangement has continued to the present day, with several variations in design, in common with most senior clubs as the replica shirt market has expanded. In the late 1970s an Admiral strip featured five vertical white stripes on the left side of the shirt and shorts, and the early 1980s shirts—as worn at the 1983 European Cup Winners Cup final—featured white vertical pinstripes. Later design changes included significant amounts of blue, and a one season reversion to white shorts, although the all-red scheme returned in 1997.

Shirt sponsorship began in 1987, and the initial shirt sponsor was JVC. Since then, with the club making fewer appearances on the international stage, shirt sponsors have tended to be more local—they have included one of the local commercial radio stations, Northsound. Aberdeen last season had announced their intention to move away from local sponsorship. Sponsored by Apex Tubulars at the time, that deal ended at the end of the 2007/08 season. In a turnaround though, Aberdeen FC Managing Director, Duncan Fraser, announced the side would bare the name of local company Team Recruitment on their shirts for the next two seasons. It is believed no international sponsor showed interest.

Change, or "away", strips have tended to be either white, often with black shorts, or a combination of yellow and black, referring back to the black and gold strips of the pre-war era, although for a time in the 1970s, Aberdeen sported an all-blue change strip with white socks. For the 2007–08 season, the change strip is all-white, with a third kit of yellow and black halves available if needed for European games, or in the event of a clash involving both red and white.

The club did not have an official crest before 1972, but several variations on the letters AFC had from time to time featured on the shirt, usually in some kind of cursive font. In November 1972, the club unveiled an official crest or logo, designed by Aberdonian graphic designer Donald Addison. The design represented a capital letter A as the side view of a football goal, with a ball forming the crossbar of the letter. This ball was crosshatched in such a way as to depict it as being inside the net, signifying the scoring of a goal. The logo was completed by the letters FC in smaller type at a level with the ball element. This badge was used on the shirts from around 1978, with no significant alterations until the mid-1980s when the words "Aberdeen Football Club" were added in a circular border, and the date of the club's founding, 1903, was added under the goal element. The current version of the crest, which retains these elements in a unified design, was introduced at the start of the 1997–98 season. Two stars signifying the winning of the two European cups in 1983 were introduced over the badge in the 2005–06 season. 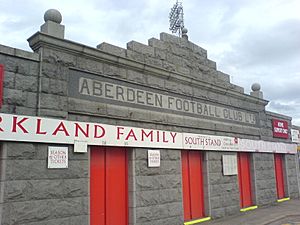 Aberdeen have played at Pittodrie Stadium, the name of which comes from the Pictish for "place of manure", throughout their existence. The ground was first used by the original Aberdeen F.C. in 1899, in a 7–1 win over Dumbarton; when they merged with two other teams in 1903, the new club took over the old Aberdeen ground. On August 15 1903, 8,000 spectators turned up to watch the new Aberdeen draw 1-1 against Stenhousemuir, the first game played at Pittodrie by its amalgamated tenants. The club initially rented the ground, but subsequently bought it in 1920. The stadium contains 21,600 seats, but due to the directors' boxes, some sources place this figure at 22,000. The record attendance occurred on March 13 1954, when 45,061 spectators turned up for a Scottish Cup match between Aberdeen and Hearts.

The stadium consists of four stands. The Main Stand, which houses the club offices and players facilities, holds the majority of the supporters. The Merkland Road Stand is primarily for families. The South Stand is opposite the main stand and a quarter of this section is used to accommodate travelling supporters, except for Old Firm games, where half of this stand is given to the visiting fans. The newest element is the Richard Donald stand at the East, or Beach End, of the ground, and is named after former chairman Dick Donald. This is a modern, two–tier design, completed in 1993, containing hospitality suites which is significantly taller than the other structures at the ground. In 1978, Pittodrie became the first all covered, all-seater stadium in Britain.

The club are examining a move to a new stadium in Aberdeen.

Aberdeen inaugurated the Hall of Fame following the club's centenary celebrations in 2003. At the launch, it was claimed that over a five-year period, around 50 players and staff would be inducted. However, as of November 2007, the following initial inductees are still the only ones listed on the official website as members: 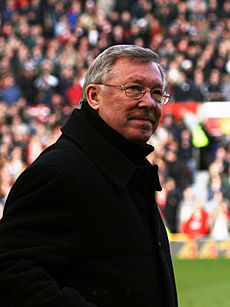 Alex Ferguson, the most successful manager of Aberdeen.

List of full-time managers, as of 3 November 2012. Only competitive matches are counted. Caretaker managers are not listed.

All content from Kiddle encyclopedia articles (including the article images and facts) can be freely used under Attribution-ShareAlike license, unless stated otherwise. Cite this article:
Aberdeen F.C. Facts for Kids. Kiddle Encyclopedia.