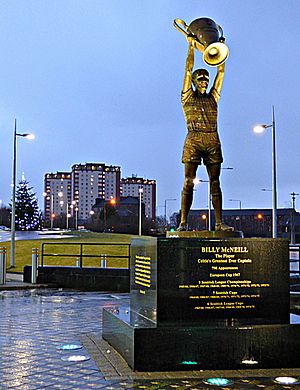 Statue of McNeill at Celtic Park

McNeill was born in Bellshill. He played for nearby club Blantyre Victoria before signing for Celtic in 1957. During his playing career at Celtic, McNeill was the captain of the clubs most successful sides of the 1960s and 1970s. In his 18 seasons at the club, Celtic won many honours. This totalled nine league titles, seven Scottish Cups, six Scottish League Cups and one European Cup. In the 1966–67 season, Celtic won the European Cup Final against Inter Milan, with McNeill as captain. This was the first European Cup won by a British side, and the only to date won by a Scottish side. Celtic again made the European Cup Final in 1970. However, McNeill's side lost to Feyenoord.

McNeill played all of his senior games for Celtic. This makes him the Celtic player with the most games played for the club at 822. He retired from playing in 1975.

McNeill played for Scotland between 1961 and 1972. In the 29 games played for his country, he scored three goals.

Soon after retirement from playing, McNeill became a football manager. For a short time, he managed Clyde. He left Clyde after a short time for Aberdeen. He finished as a runner-up in the league and Scottish Cup with Aberdeen. Celtic manager Jock Stein left the club in 1978. McNeill soon became Celtic's manager. As Celtic manager between 1978 and 1983, he won three league titles, a Scottish Cup and a Scottish League Cup. He would go on to manage English sides Manchester City (1983–86) and Aston Villa (1986–87).

McNeill returned to manage Celtic in 1987. In his first season in his second stint, Celtic won the league and Cup double. The next season, 1988–89, the side won another Scottish Cup. However, the next two seasons saw no trophies won at Celtic and McNeill was sacked in May 1991. He never returned to full management but was caretaker manager at Hibernian for a short time in 1998.

All content from Kiddle encyclopedia articles (including the article images and facts) can be freely used under Attribution-ShareAlike license, unless stated otherwise. Cite this article:
Billy McNeill Facts for Kids. Kiddle Encyclopedia.