Kids Encyclopedia Facts
This page is about the town in North Lanarkshire, Scotland. For other uses, see Bellshill (disambiguation).

The earliest record of settlement in the Bellshill area is a village called Belmill, recorded on a map by Timothy Pont published in 1654. The village consisted of a row of quarry workers' houses owned by Mr. Bell, who owned a stone quarry to the south of Belmill. After the quarry closed, the village disappeared and a settlement developed nearby called Crossgates. About 1810, this new settlement took on the name Bellshill and continued to grow absorbing nearby villages such as Black Moss, Sykehead and Nesnas.

According to the first Statistical Account, in the late 1700s the parish of Bothwell, which encompasses modern Bellshill, was a centre of hand-loom weaving with 113 weavers recorded. Only 53 colliers were listed. A hundred or so years later, these occupations had changed places in degree of importance to the area economy. With the introduction of new machinery in the mid 19th century, many cottage weavers lost their livelihood. Demand for coal to feed British industry meant that by the 1870s 20 deep pits were in operation in the area.

The first mine to open (and the last to close in 1953) was the Thankerton mine. Others followed swiftly and rapidly increased the size of the town, even attracting a steady stream of immigrants from abroad, particularly Lithuania, so much so that the town is sometimes referred to as 'Little Lithuania'.[1] The rise in the migrant Lithuanian population led to the opening of The Scottish Lithuanian Recreation and Social Club within Calder Road in the Mossend area.

Iron and Steel production were also central to the development of the town. J. B. Neilson, developer of the revolutionary 'hot blast' process, opened the first iron works in the area (Mossend Iron Works) in 1839.

During the industrial boom, a number of railway stations were situated in the area, including Mossend, Fallside and Bell Cross. The settlement is now just served by Bellshill railway station.

In the 1870s, Bothwell Parochial Board built the two-ward Bellshill Hospital. During World War I, the hospital specialised in infectious diseases. In 1917, the hospital began to change focus to become a maternity hospital, the first in the Lanarkshire area, with new dedicated maternity buildings being opened in 1958 and 1962. The hospital was also the first in the world to have an 'Obstetric Flying Squad'. It was the birthplace of many famous faces including politician Robin Cook, footballer Ally McCoist and singer Sheena Easton. The hospital was closed in 2001 and demolished in 2003 to make way for new housing developments. 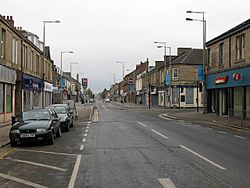 According to a report by the Halifax Building Society, in the first quarter of 2005 Bellshill was the UK's property hot spot with a 46% rise in house prices. This took the average property price to £105,698 (according to reports published April 2005).

In 2006, a new mosque was opened in the Mossend area of Bellshill becoming one of the largest mosques in Scotland.

The streetscape project, a plan to regenerate and modernise the town centre, commenced Apr 2007 and was completed nearly three years later. The project, created a one way system on the main street with more space for pedestrians.

There is a free public library within the Bellshill Cultural Centre. Various singers, such as Sheena Easton, and sportsmen hailed from the town.

Bellshill is also known for its music, especially since the mid-1980s. Bands such as the Soup Dragons, BMX Bandits and Teenage Fanclub put Bellshill on the map as an indie rock hot-spot in Scotland. The scene - known as the Bellshill Sound or the Bellshill Beat - was celebrated by influential DJ John Peel in the Channel 4 television series Sounds Of The Suburbs. Bellshill continues to produce well respected and influential independent pop music, with members of Mogwai hailing from the town. Sheena Easton was from the town, and attended Bellshill Academy.

All content from Kiddle encyclopedia articles (including the article images and facts) can be freely used under Attribution-ShareAlike license, unless stated otherwise. Cite this article:
Bellshill Facts for Kids. Kiddle Encyclopedia.