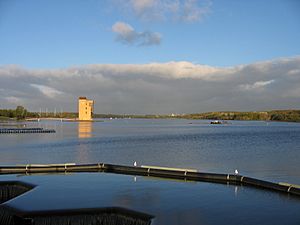 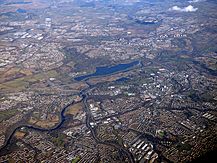 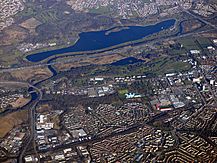 Burnbank and Strathclyde Loch north-east of the River Clyde

Strathclyde Country Park is a country park located on the outskirts of Motherwell in North Lanarkshire, Scotland.

The park covers some 4 km2 (1.5 sq mi), centred on the artificial Strathclyde Loch. It is located next to the River Clyde between Hamilton and Motherwell. Strathclyde Park forms what used to be known as the Low Parks of the now demolished Hamilton Palace and still includes buildings associated with the palace. When the loch was created in the early 1970s it involved the flooding of the old mining village of Bothwellhaugh. The park offers many amenities and attractions such as coarse angling, woodland walks, watersports, and a camping and caravanning site. One of Scotland's theme parks, M&D's, is located in the park. Until 1996, the music festival T in the Park was held here.

The west side of the park is bounded by the River Clyde, which was diverted when the loch was built in 1975. The original course can be seen between the east loch shore and the island. Across the Clyde is the M74 motorway, which creates a significant level of noise. The east side of the park is quieter, with woodland and paths leading up the slopes to Motherwell.

The remains of Bothwellhaugh Roman Fort and a Roman bathhouse can be seen in the park, where the South Calder Water flows into the loch. There is an arched Roman bridge across the South Calder nearby. The site of the Battle of Bothwell Bridge (1679) is to the north west of the park.

Although the focus of the park is on recreation, a variety of habitats are present, including wetlands and native woodland.

The Greenlink Cycle Path start-off point is located in the park and travels to Motherwell Town Centre. Also, a section of the Clyde walkway, from Glasgow to New Lanark, runs through the park.

The watersports events of the 2005 Glasgow Special Olympics and the 2006 Scottish Triathlon Championships were staged at the park.

In 2009 the park was used to host the first ever Great Scottish Swim, a mass participation open water swim event. The event was due to be held there again in 2010 but was cancelled due to poisonous blue-green algae in the loch.

The park was an official venue for the 2011 International Children's Games.

The park hosts a Parkrun event at 09:30 every Saturday morning. It has also hosted an 'Inflatable 5k' event, popular with families and participants collecting charity donations. 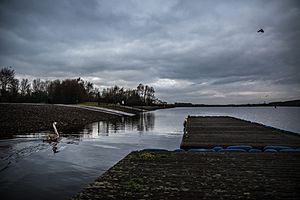 A gloomy day at Strathclyde Park

On the June 2012 Strathclyde Country Park was host to the Western District Open Water Swimming Championship that attracted up to 70 competitors.

Following the race 57 people were discovered to be suffering from stomach cramps, sickness and diarrhoea 5 of the 57 tested positive for norovirus. All water based activities were subsequently temporarily suspended.

Experts attributed the incident to heavy rainfall prior to the event, with council officials confirming that tests of the water quality in the days before the event within the accepted open water guidelines.

All content from Kiddle encyclopedia articles (including the article images and facts) can be freely used under Attribution-ShareAlike license, unless stated otherwise. Cite this article:
Strathclyde Country Park Facts for Kids. Kiddle Encyclopedia.