Blantyre ( or ; Scottish Gaelic: Baile an t-Saoir) is a civil parish in South Lanarkshire, Scotland, with a population of 17,505. The name is probably originally Cumbric blaen tir "top of the land" which has been Gaelicised. It is bounded by the River Clyde to the north, the Rotten Calder to the west, the Park Burn to the east and the Rotten Burn to the south.

Blantyre was the birthplace of David Livingstone, the 19th-century explorer and missionary (see below).

Blantyre has a number of small hamlets. High Blantyre is the area to the east and south of Burnbrae Road and continues to High Blantyre cross at the north. It is thought to be the area of earliest settlement, with a Bronze Age village near Auchintibber 2 miles (3 km) south of Blantyre Parish Church (High Blantyre). Also to the west is Greenhall Park, where the Calder (Cawther) flows to eventually join the Clyde near Flemington.

Blantyre is loosely divided in half by Main Street, High Blantyre. At the west-end is Priory Bridge – named after the former priory to the north which was home to monks from around 1235. There is also Coatshill and the village, the oldest industrially developed part of Blantyre. Glasgow Road continues south via Springwell and eventually joins to Burnbank. Next to the David Livingstone museum, at the end of Station Road, is an iron suspension footbridge which crosses the River Clyde giving pedestrian access to Bothwell.

On 22 October 1877, Blantyre was the site of the Blantyre mining disaster, where 207 miners (men and boys) were killed when a coal mine exploded due to methane gas. A monument to the disaster of which the youngest victim was a boy of 11 is at High Blantyre cross. The site of the mine now lies under the East Kilbride expressway.

Nearby towns and cities

In August 1983, a democratic non party political pressure group was formed in Blantyre called Blantyre Youth Council, which aimed to represent young people's views in the town and actively engage young people in campaigning for better facilities. The youth council contributed over the next few years to developing youth involvement in the local volunteer centre and community council. BYC set up a youth enquiry service for young people and a Claimants Union which advised young people and adults. The youth council conducted a series of public meetings for youth throughout the town and conducted a survey amongst the town's youth which demonstrated a need for more and cheaper facilities for young people. The full-time Youth Enquiry Service Base was in the Elizabeth Scott Centre (now Terminal One). In 1984, as part of their "Working with young People" policy, Strathclyde Regional Council created Blantyre Youth Development Team against initial opposition from Blantyre Youth Council who saw no need for an officer/adult led organisation in a town with an active and successful youth council. Blantyre Youth Council eventually agreed to disband however and support the youth development team on the principle that it was to be youth led. At an early meeting, the youth development team unanimously agreed to support a motion calling for the organisation to concentrate its energies on creating a youth centre in the town. The YDT gained charity status in 1997 and created the Terminal One youth centre. It provides services to the young people of Blantyre and North Hamilton including music tuition, multimedia artistic tuition, recording studios, youth clubs, excursions and self-development programmes. It is funded by South Lanarkshire Council, the Scottish Arts Council and the Blantyre/North Hamilton SIP. 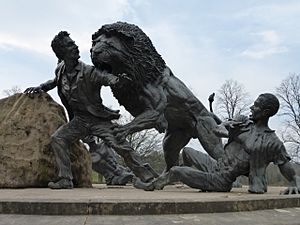 Livingstone's famous encounter with the lion at Mabotsa is the subject of a bronze sculpture in the grounds of the David Livingstone Centre. It was designed by Ray Harryhausen who was married to one of Livingstone's descendants from the American branch of the family.

Blantyre's most famous son is the 19th century missionary and explorer David Livingstone. He is acknowledged as the first European to see the "Mosi-oa-Tunya" (Tokaleya and Tonga: "the Smoke that Thunders") which he named in English the Victoria Falls after the then British sovereign Queen Victoria. His birthplace and childhood home is now a museum at the end of Station Road, on the banks of the River Clyde. The Centre includes a museum dating from 1929 (now run by the National Trust for Scotland), a playpark, a cafe, a shop, an African Garden and several workshop studios. An adventure assault course also existed there before a young man died in 1995.

Mandala (the largest city and commercial centre of Malawi, one of the territories Livingstone explored) is more commonly named Blantyre in recognition of the link created by Livingstone during the colonial era.

All content from Kiddle encyclopedia articles (including the article images and facts) can be freely used under Attribution-ShareAlike license, unless stated otherwise. Cite this article:
Blantyre, South Lanarkshire Facts for Kids. Kiddle Encyclopedia.