East Kilbride (Scottish Gaelic: Cille Bhrìghde an Ear) is the largest town in South Lanarkshire in Scotland. It is also designated as Scotland's first new town on 6 May 1947. The area lies on high ground on the south side of the Cathkin Braes, about 8 miles (13 km) southeast of Glasgow and close to the boundary with East Renfrewshire.

The town is enclosed by the White Cart River to the west and the Rotten Calder to the east, the latter flowing northwards to join the River Clyde near Cambuslang. This area was previously the site of the small village of East Kilbride, prior to its post-war development. 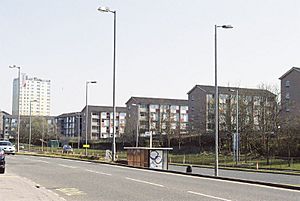 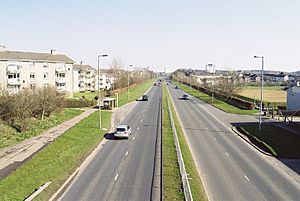 The earliest evidence of habitation in the area dates back to ancient graves found near the Kype Water to the south of the district. Roman coins and footwear have also been found in the area.

East Kilbride takes its name from an Irish saint named St Bride (or Brigit), who founded a monastery for nuns and monks in Kildare, Ireland in the 6th century. Dál Riatan monks introduced her order to Scotland. The anglicisation Kil, takes its root from the early Celtic monastics that St. Brigit is representative of: the Culdees or Céli Dé. The Céile Dé were 'the clients or companions of God'. In modern Gaelic, Cille Bhrìghde translates similarly as 'the clients or companions of Brigit.

The original parish church was located on the site of a pre-Christian sacred well, which is possibly the origin of the association with St. Brigit, since the well was dedicated to the Celtic goddess Brigid, whose traditions have been continued through the reverence of St. Brigit. Over the centuries, the church has been destroyed and rebuilt several times, and, as a result, its current location has moved from the original site by about 50 metres (160 ft).

East Kilbride grew from a small village of around 900 inhabitants in 1930 to eventually become a large burgh. The rapid industrialisation of the twentieth century underpins this growth and left much of the working population throughout Scotland's Central Belt, from Glasgow to Edinburgh, living in the housing stock built at the end of the previous century. The Great War postponed any housing improvements, as did the Treaty of Versailles and the period of post-war settlement it created. In turn, this was followed by the Great Depression. After the Second World War, Glasgow, already suffering from chronic housing shortages, incurred bomb damage from the war.

From this unlikely backdrop a new dawn emerged which would bring East Kilbride to its unlikely success. In 1946, the Clyde Valley Regional Plan allocated sites where overspill satellite "new towns" could be constructed to help alleviate the housing shortage. Glasgow would also undertake the development of its peripheral housing estates. East Kilbride was the first of five new towns in Scotland to be designated, in 1947, followed by Glenrothes (1948), Cumbernauld (1956), Livingston (1962) and Irvine (1964).

The town has been subdivided into residential precincts, each with its own local shops, primary schools and community facilities. The housing precincts surround the shopping centre, which is bound by a ring road. Industrial estates are concentrated on the outskirts of the town, in northern, western and southern directions.

East Kilbride forms part of the Greater Glasgow conurbation. However, the urban area is not directly connected to any other. The hamlets of Nerston and Jackton which were once separate settlements are now on the periphery of the expanding town.

The nearest Glasgow district of Castlemilk is about 3 miles to the north-west, with the village of Carmunnock in between (a bypass has been built in recent years to remove Glasgow traffic from Carmunnock). Rutherglen and Cambuslang lie about the same distance to the north-east and are linked to East Kilbride via the Dual carriageway A749 road which continues into Glasgow.

Clarkston and Busby are also about 3 miles away to the west, with Thorntonhall much closer. Eaglesham lies to the south-west (again this is about 3 miles from East Kilbride centre). Another modern bypass keeps East Kilbride traffic heading for the M77 motorway away from Eaglesham.

The closest town to the south of East Kilbride is Strathaven, about 7 miles away. The majority of land in that area is taken up by Whitelee Wind Farm.

Hamilton, the administrative headquarters of South Lanarkshire is about 5 miles from East Kilbride to the east. The road linking the towns also leads to Blantyre and Bothwell and ultimately to the M74 motorway.

East Kilbride is divided into a number of smaller areas bordered by main through-roads. Part of the new town design was that each of these would be a self-contained entity, with local shops and primary schools. This is true for the original areas of the town but newer developments, such as Stewartfield do not adhere to this model.

There are approximately 30 Christian churches in East Kilbride. This includes nine Church of Scotland churches, three Baptist churches, and four Roman Catholic churches. St. Mark's Episcopal church is situated in the Murray. There is one Lutheran parish of the Evangelical Lutheran Church of England, which is located in the Westwoodhill area. An Evangelical Christian congregtion is also located in the Westwood area. The Church of Jesus Christ of Latter Day Saints meeting hall is situated in Vancouver Drive, Westwood. Three congregations of Jehovah's Witnesses share a Kingdom Hall near the centre of the town. The Christadelphians meet in Calderwood Community Centre. There are two United Reformed Churches, one in the Village, and one in the Murray. In the Greenhills area is a congregation of the Methodist church, whose premises are currently shared by the Seventh Day Adventist church.

East Kilbride is connected to Glasgow city centre by road and rail. Three main roads connect East Kilbride with surrounding suburbs and the city, one being the A727 (formerly A726) leading west to Busby and on to Clarkston Toll. Another route being the A749 which runs north into Rutherglen. Recently, the addition of the Glasgow Southern Orbital road links the west of the town directly with Newton Mearns and the M77. This road has taken over the designation A726. Similar to other New Towns, the road network within the area is populated by many roundabouts; Glaswegians jokingly refer to East Kilbride as "Polo mint City" after the round, mint sweet. The main dual carriageway road running north-south through the town is known as the Kingsway, while the main east-west road is known as the Queensway.

The current bus station went under a major £4 million expansion and re-planning of the existing site to form 14 rapid drive-through stances with new travel centre and CAB facility at the eastern gateway to the Town Centre. The bus station was designed by the architectural firm CDA. The brief given to the designers was that they were "to achieve a fast turn around of buses, safe pedestrian/vehicular segregation and a secure and accessible environment set within an attractive urban realm". The new bus station was officially opened on 3 June 2005.

There are 14 stances (stands) at the bus station that are equipped with electronic displays showing the next few departures. There is also a Travel Centre which is open Monday to Saturdays between 0830 and 1730. The operators at the bus station are First Glasgow, Stagecoach West Scotland, Citylink.

Many of the busy roundabouts in East Kilbride feature underpasses which allow pedestrians and cyclists safe access across roads. On 19 June 2009, National Cycling Route 756, connecting East Kilbride and Rutherglen with the City Boundary, was opened. In November 2007, South Lanarkshire Council published three cycle routes, named the "East Kilbride Cycle Network" which start at the East Kilbride Shopping Centre in the centre of the town and are signposted. Route One is route is to Strathaven, via Newlandsmuir; Route Two to St. Leonard's Shopping Centre, and Route Three is to Calderglen Country Park. 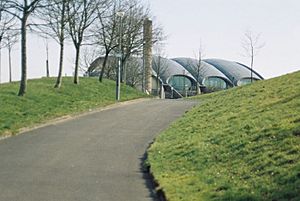 A seated statue of Sir Walter Scott, at the corner of Old Coach Rd and Markethill Rd, is locally known as "The White Man". Outside the Montgomery Arms in the village is a loupin'-on-stane or mounting block. The National Museum of Rural Life is a museum and working farm, featuring 1950s dairy farm methods, run by National Museums of Scotland at Kittochside. The James Hamilton Heritage Park is a 16 acres (6.5 ha) manmade lake with watersports facilities and surrounding nature sanctuary. It is overlooked by Mains Castle, a privately owned tower house. St Bride's Church, by modernist architects Gillespie, Kidd and Coia, was built 1957–1964.

One of the most significant buildings of an earlier phase of development was Dollan Baths leisure complex (opened 1968) which has category A listed status. The Dollan Baths are the subject of a local urban myth, which told that the pool was built 5 cm short of Olympic size. In fact, the pool was built as 55 yards (50 m) long, but is only six lanes wide, rather than the Olympic standard of 50m and ten lanes wide. The Aqua Centre re-opened on 28 May 2011 after a major refurbishment costing £6.5 million. Facilities include swimming pool with moveable floor, health suite and fitness gym. The famous glass wall allowing views from the reception area into the pool remains.

Contains exhibits relating to medical pioneers, William and John Hunter, who were born in the area. In recent years the Hunter House was bought by the neighbouring Calderwood Baptist Church. The building was refurbished and is now used for meetings, groups and functions as well as housing some exhibits from its previous life as a museum. The building also houses a café.

A local nature reserve which comprises a Lowland Raised Peat Bog, a UK BAP priority habitat. The reserve is owned by South Lanarkshire Council and maintained by The Friends of Langlands Moss L.N.R. A boardwalk allows visitors to walk over the reserve safely while observing the wildlife which lives on the Moss – many species here occur only in Bog habitats making this site one of special importance. Located just south of East Kilbride, the reserve is accessed easiest from the A726, heading towards Langlands Golf Course & Auldhouse.

Whitelee Wind Farm, Europe's largest on shore wind farm, is located near Eaglesham, to the south of East Kilbride.

East Kilbride from the Scottish Lowland Football League, is based in the town, and play at the K Park Training Academy at Calderglen Country Park.

East Kilbride Thistle Juniors also operate from The Show Park in The Village.

East Kilbride RFC were formed in 1968 and are based at the Torrance House Arena, at Calderglen Country Park. From 1976 they rose steadily through the leagues, peaking for three years in Premier 2. They now play in the West Regional League 1, the fourth tier of club rugby. They run two senior men's teams and numerous youth teams which are linked to the local schools. Current Scotland national player, Alasdair Strokosch, played through all the youth levels at EKRFC.

East Kilbride Lawn Tennis Club is one of the oldest tennis club in Scotland.

EK82 Handball Club Founded in 1972, they train at the John Wright Sports Centre and the Alistair McCoist Complex. They play in the Scottish National League.

Athletics in the town is covered by three athletics clubs: Whitemoss, East Kilbride and Calderglen. Both Whitemoss and East Kilbride Athletic Club are based at the John Wright Sports centre.

All content from Kiddle encyclopedia articles (including the article images and facts) can be freely used under Attribution-ShareAlike license, unless stated otherwise. Cite this article:
East Kilbride Facts for Kids. Kiddle Encyclopedia.