Busby is a village in East Renfrewshire, Scotland. Busby's close proximity to Glasgow effectively makes it a suburb of the city, though it remains administratively separate. It lies on the White Cart Water 6 miles (9.7 km) south of Glasgow City Centre.

As a settlement, Busby dates back at least 700 years. Its modern origins may be dated to several significant changes on the 1780s.

The first big change was in the landscape. Until the 1780s Busby village consisted of a scatter of cottages along a track leading from Carmunnock to Mearns. This route forded the River Cart to Newford at Bonnyton.

This original village or fermtoun was in the area of the present Busby railway station. For centuries the occupants had worked the surrounding land from this central settlement. However, by the 1780s the landowner was in process of sweeping away the old fermtoun. The occupants were moved to the newly established farmsteads of Easter Busby, Wester Busby, Busbyside and Ryat. Busby as a village name could have disappeared, had it not been for parallel events on the opposite side of the River Cart.

The second big change started in 1780 with the founding of Busby's first cotton mill. This was at Newmill, on Cartsbridge lands on the opposite side of the River Cart. Busby and Newmill each had several earlier mills. Busby itself had Busby Meal Mill at the end of Field Road (founded before 1300), and Busby Waulk Mill in the Glen. Newmill also had two mills, situated together at the waterfall. The first was another early Meal Mill and the second a more recent Lint Mill. The cotton mill built in 1780 was on a completely different scale to the old rural mills. It attracted many families to settle in the area, and the centre of Busby swung from the old declining fermtoun on the Lanarkshire side of the River Cart, to Newmill on the Renfrewshire side.

A second Cotton Mill followed in 1790, then a Bleachfield and Printworks six years later. These industries provided the employment for the development of the modern village of Busby.

The third major change in Busby in the 1780s was the new road, from Paisley to East Kilbride. The first Busby Bridge was built on this route c.1785, and replaced an earlier ford above the waterfall. The new road changed the focus, from the old Carmunnock—Mearns road, to the Clarkston—East Kilbride road.

Busby was never the perfect site for building a village, but developed due to the availability of water power on the River Cart. From the 1780s the village became centred on a hilly part of Cartsbridge Farm, originally known as "The Bank". Main Street was built on a very steep hill and the road to Clarkston developed along a fragile slope which has collapsed several times since. 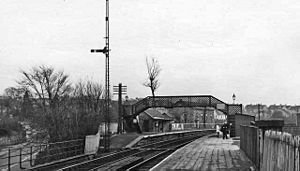 Another major wave of change occurred in Busby in the 1860s when the Printworks brought the railway to Busby. Again the route to Busby was far from perfect, and the massive viaduct necessary to span Busby Glen was the most expensive structure on the line. The railway forced a change to the East Kilbride Road and the road bridge under the station still creates a hazard for heavy traffic on the main road.

The railway brought a second wave of growth to Busby from the 1870s. The subsequent growth of the commuter suburb compensated for the decline of the Mills and Printworks. This ensured the survival of Busby into the twentieth and twenty-first centuries.

All content from Kiddle encyclopedia articles (including the article images and facts) can be freely used under Attribution-ShareAlike license, unless stated otherwise. Cite this article:
Busby, East Renfrewshire Facts for Kids. Kiddle Encyclopedia.